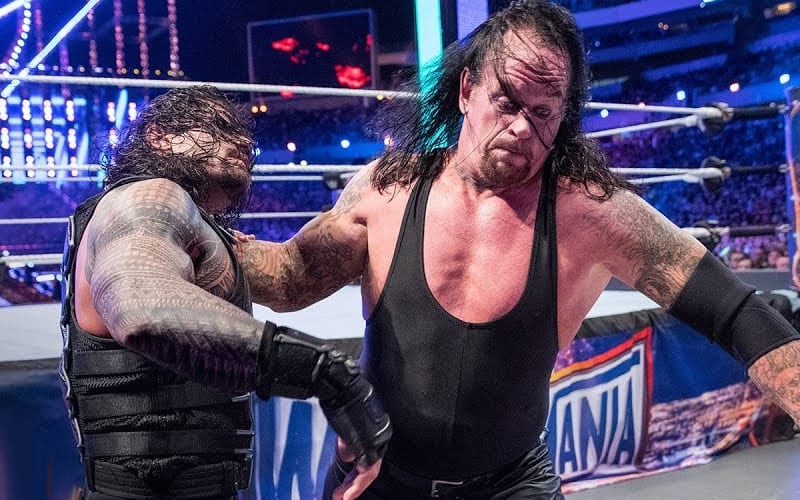 The Undertaker lost to Roman Reigns at WrestleMania 33, and neither of them were happy about how it went down. That match stood as a turning point for both of their careers.

A blown Tombstone reversal spot was the cherry on top of an already mediocre match. The Undertaker didn’t want to retire on it either so he kept pressing on. This was highlighted in the Last Ride docuseries.

While speaking with Complex’s ‘Load Management’ podcast, Roman Reigns spoke about that WrestleMania 33 match. He said that it was a learning experience and he doesn’t believe he’s had a bad match since.

“But yeah, I definitely feel like I got better from that, learning from him [The Undertaker] and learning from that experience. I don’t think… and y’all can call me out if you want but I don’t know if I’ve had a bad one since. As far as wrestling matches are concerned, I’ve been in some bangers ever since and there’s a lot of different details that I learned in order to utilize those skills and put a few more tools in my bag to take to work everyday.”

That being said, Roman Reigns got a ton of heat from the crowd after that WrestleMania match versus The Deadman. The crowd booed him heavily during the opening of the RAW After WrestleMania. It left him to really only say: “this is my yard now” before leaving.

“I don’t think anyone ever had more heat than I did after I beat Undertaker on that Monday night. I could’ve sat out there another ten minutes. It would’ve been easy, no problem. I could’ve gone 30 minutes out there and just let the crowd do what they do. But it’s different now because there is no live crowd so, you really just gotta go off of social media which… kinda sucks to be honest because you’re sitting there going through the — Dan from nowhere liked it. Bob from who cares didn’t like it, so it’s one of those deals where it’s sort of the social media algorithms that you have to go off of to know what’s really working because in our business, sports-entertainment, we’re used to hearing it right away, especially very detailed in what we do. It’s not like just generic team chants or sucker songs. It can get very specific with what they’re into or what they’re not.”

Roman Reigns and The Undertaker learned a lot from that match and neither will ever forget it. Reigns is confident that he was able to take that lesson and make the most of it. Now he is the Tribal Chief and WWE Universal Champion to further prove that the WWE ring is his yard.