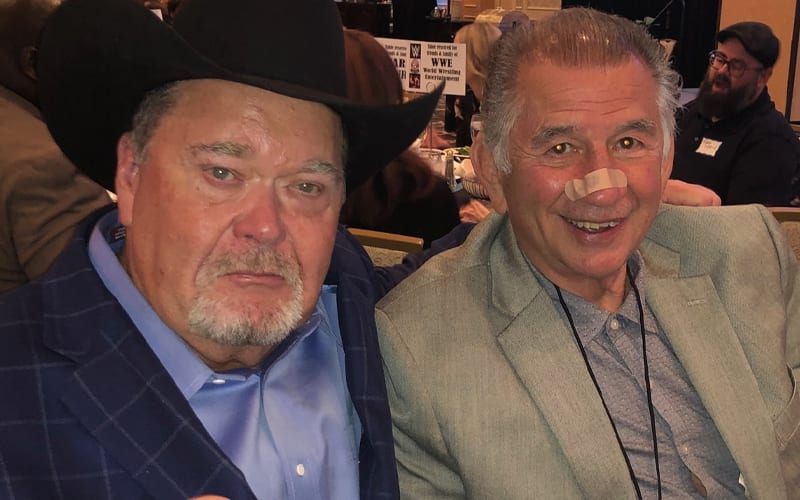 WWE released Gerald Brisco from the company after decades of working for them. This was a departure blamed on the pandemic, but Brisco is already teasing that he’s not done yet.

Jim Ross doesn’t think that Gerald Brisco is done yet either. Although JR did admit that it was a “great gesture” for Vince McMahon to call Brisco personally, Ross can see how Brisco still has a lot to give.

During Grilling JR, the WWE Hall Of Fame announcer spoke about Gerald Brisco’s release from WWE, and what he meant to the company. If it weren’t for the Briscos then Vince McMahon wouldn’t have been able to move into Atlanta as he did. Things would be must different as well.

“Like recently, Gerry Brisco got relieved of his post, which was not a surprise, and Gerry [had] been there for over 30 years… all those things are meaningful, but it’s not unexpected. Gerry’s 70, 70-plus years old, he’s had a tremendous run there. How it was handled may not have been exactly the ideal way.”

“I will say that according to what Gerry said, Vince called him personally and gave him the news which I respect for doing that. Didn’t have somebody else do it, so I thought that was a great gesture without question. But even though I love Gerry Brisco, he’s like a brother to me. The inevitability of getting a certain age and the fact that, you know, Gerry was so instrumental there and for me as Head of Talent Relations, we had a lot of real MVPs and he was certainly, if not at the top of the list, he’s with everybody else at the top of the list, whoever else was there, Gerry was there as well. He scouted, he went on the road, he went to all these amateur wrestling tournaments, he mentored guys.”

“He was a great mentor, soft spoken, slow talking, had a great record as a tag team wrestler with his brother Jack. He was a booker, territory owner. If it hadn’t been for Gerry and Jack, Vince would’ve never been able to buy Atlanta. So, Gerry had a very distinguished career and I’m assuming, I mean at least my mind’s eye that he’s not through. He can do more things for other companies if he chose to.”

We’ll have to see what Gerald Brisco does next. He still has a great eye for talent. It’s not out of the realm of possibility to assume that he might come across another person with raw potential be a great pro wrestler. He probably has a couple of companies to call and see if they’re interested in taking a look at his new discovery.