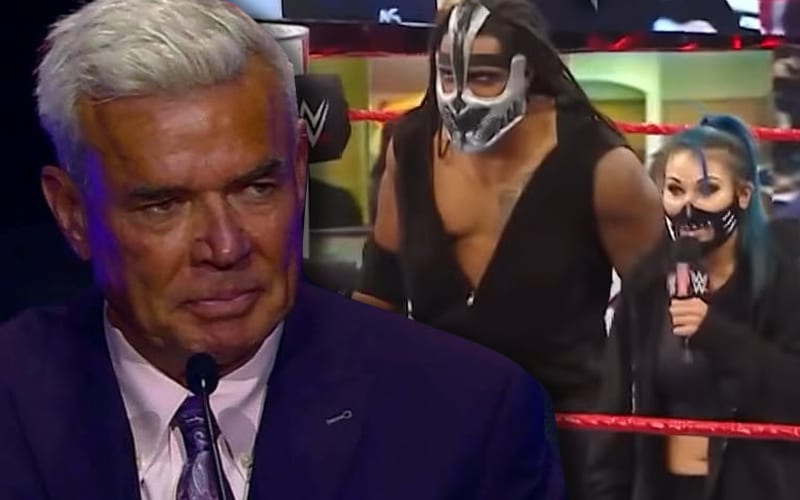 WWE’s Retribution stable didn’t appear on RAW this week, but they made their presence felt. All five core members are quarantined, but reportedly negative for COVID-19. Eric Bischoff and T-Bar had a little war of words on Twitter, and Easy E doesn’t even know who T-Bar is.

Bischoff already laid into Retribution on his After 83 Weeks program. He said the angle sucks. Then T-Bar fired back and thanked Bischoff for inspiring them on how to destroy a pro wrestling company.

During 83 Weeks, Eric Bischoff had more time to talk about Retribution. Bischoff said that WWE has screwed this invasion angle up in an incredible way. He’s not blaming Bruce Prichard or the Superstars involved, but something needs to be changed instead of backloading the second act of this angle with information to fix plot holes.

“I look at social media and someone named T-BAR sent me something. What is a T-BAR? Who gives a f*ck. What’s he been in the business a minute and a half? Is his coffee still hot? C’mon, give me a break. If we’re gonna talk about it T-BAR, I feel for you. You’re new to the business, you’re greener than goose shit, you’ve really not accomplished anything yet. I know you will, I believe you have potential. And I’m not blaming you for the RETRIBUTION storyline. I’m not blaming the writing team. I’m certainly not blaming one of my best friends Bruce Prichard. But it’s a f***ed up story. It just is. Could you possibly screw up an invasion storyline anymore in such a short period of time? You can’t blame the talent. They’re doing the best they can and this is a great opportunity for you T-Bone or T-BAR or T-Rex, whoever you are. I get it. It’s not your fault. I’m not criticizing you. It is what it is.”

“I’m always gonna support WWE and I’ll say it a million more times before I’m done doing this podcast – I love Bruce Prichard. I have nothing but respect for people there, but you’ve gotta call it what it is – it’s the shits or it’s not. Hopefully, it’ll turn around. Maybe they’re gonna say ‘OK, we’re gonna do this invasion storyline, what’s the premise….let’s find one that actually makes sense and is a little bit logical that we can build upon.’ Let’s start our story, let’s have an Act I, let’s have an inciting incident, let’s have something that’s about to define why this is about to happen. Even if you just have it in your head so you can build upon it going forward – it doesn’t necessarily have to be really obvious to the audience, but you have to know why you’re starting and maybe you don’t know how you’re gonna end it yet. I’m OK with that. You don’t have to know the end of the third act, and that’s OK. I get that. Sometimes stories evolve and opportunities present themselves and things like that and you’ve gotta be fluid and go with the flow and the audience and the interest.”

“But if you start out a storyline and you have no idea why you’re starting out a storyline, you have no idea why the audience can begin to understand why or what’s the motivation, then you start backfilling it by the time you get to Act II. I’m not just picking on this storyline – WWE does a lot of great stuff. They’re in a universe onto themselves, and nobody’s perfect. But this storyline, T-Bone, is something you’re a part of it. It’s not your fault, I get it. Be careful about lashing out on social media quite yet. If this thing gets some traction and ends up being something everybody’s excited about, I’ll be the first to apologize for my premature judgment of the storyline.”

He still doesn’t know who T-Bar is, but he might if WWE didn’t change his name. Dominik Dijakovic been working the indies since 2013 and signed with WWE in 2017. That doesn’t change his current situation in WWE as he’s only been known as T-Bar on RAW.

Hopefully, WWE can fix some of the issues they have with Retribution. They certainly seem to have a bit more time as the members are unable to leave their homes.