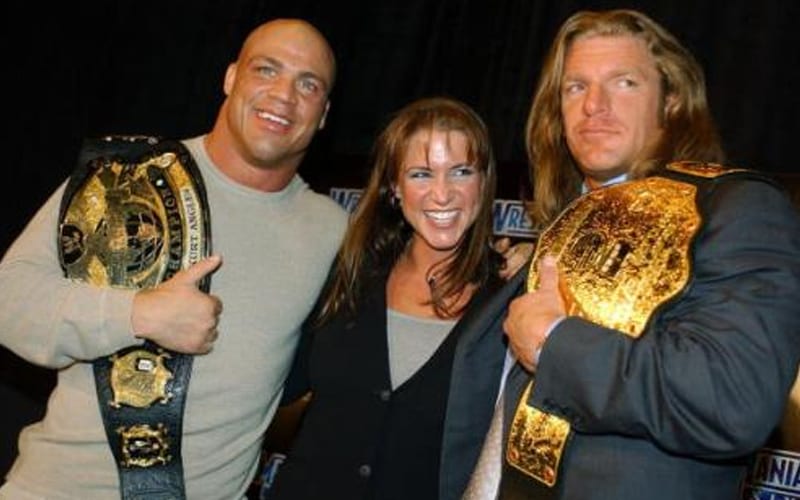 Triple H and Kurt Angle went to war many times before, but was Stephanie McMahon supposed to be part of that equation? The legend is that Triple H nixed a romantic triangle storyline between himself, Angle, and Stephanie. That seems hard to believe for Jim Ross.

JR was around WWE during that time and he knows the kind of business Triple H and Kurt Angle used to do. He spoke out on Grilling JR about the legend that Triple H didn’t want Angle with his wife on television.

To Jim Ross, that idea seems stupid because he said that kind of thing would be out Triple H’s wheelhouse.

“If Triple H made that statement, it’s completely out of his wheelhouse. Because that statement itself is so stupid. Triple H isn’t a stupid guy. So, I don’t believe that. I never heard that on any authority. That match – those guys are so good, either guy could’ve gone over and it was still gonna be a great match and a good outcome.

The match itself was gonna be outstanding, but I have a hard time believing that. Kurt had great respect for everyone there and he was really coming into his own as that entertaining character. Because he’d already proven he was a badass. And that’s the thing, quite frankly, I used to have some issues on Kurt with that because I thought sometimes he acted too silly and acted too dumb. Dumb jock – the Cowboy hat thing with Austin and things of that nature. I liked the badass.

I liked the Kurt Angle that was the Olympic gold medalist that could whoop anybody’s ass in the building and people knew that. I could’ve watched Kurt Angle and Triple H wrestle every week and it would’ve have bothered me a bit because I loved their chemistry and they were true to the business and they told great stories.”

It would have been interesting to see how a romantic triangle storyline might have turned out between the three, but perhaps it is better left to continue wondering what could have been. The idea that Triple H cancelled an idea that could have brought a lot of heat to his angle is a stretch for Good ‘ole JR.