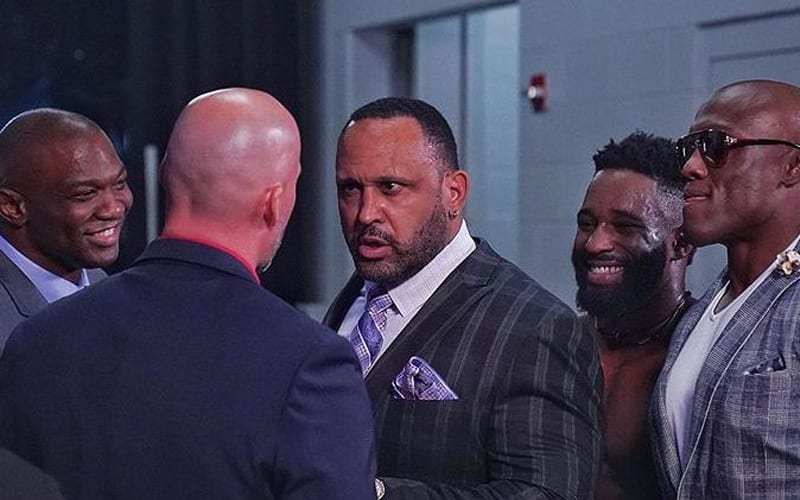 Cedric Alexander turned heel and joined the Hurt Business. Now he is alongside MVP’s stable as they do their thing on Monday nights. This wasn’t always the plan because Alexander heard several things along the way.

As he spoke with TalkSport, Alexander revealed that he heard Ricochet or Apollo Crews might get the Hurt Business spot. In the end, he got the call, but he didn’t know it was happening until the moment he was needed.

This falls in line with what we’ve heard about WWE’s creative for a while now. Alexander confirmed that there was no plan until it was decided very close to becoming a reality on television.

Honestly, I never officially knew until the night it happened. It was always the case of ‘it would be cool if’ and it would be nice if this happened and I’d heard maybe it would be Ricochet or Apollo [Crews] – we just never knew. There was never a set plan until it was like ‘hey, you! You’re in the Hurt Business now.’ Ok, sweet [laughs]. Let’s do it. I’ll take that.

It was ready I’m ready to cut this [promo]. I’ve been working on promos secretly myself for a few years now, but I’ve just never had the opportunity to speak. It’s been working out great. The last time I was nervous doing a promo was the first night I joined The Hurt Business. After that, everything was kicking.

There’s small things I have to work on of course, but there’s never been a point where I’ve been like ‘I don’t know if I can do this!’ At some points, I’ll forget what I’m about to talk about, but then I’m there in the ring and I’m like ‘Oh, OK, I got this.’

Cedric Alexander also made it very clear that green is the only color that the Hurt Business is about. They are out to make money and hopefully, those checks will increase as Cedric Alexander receives more screen time.

WWE backed away from the New Nation Of Domination idea after a lot of people suggested that the abandon the idea. It seems that they’ve figured out a way to make things work.