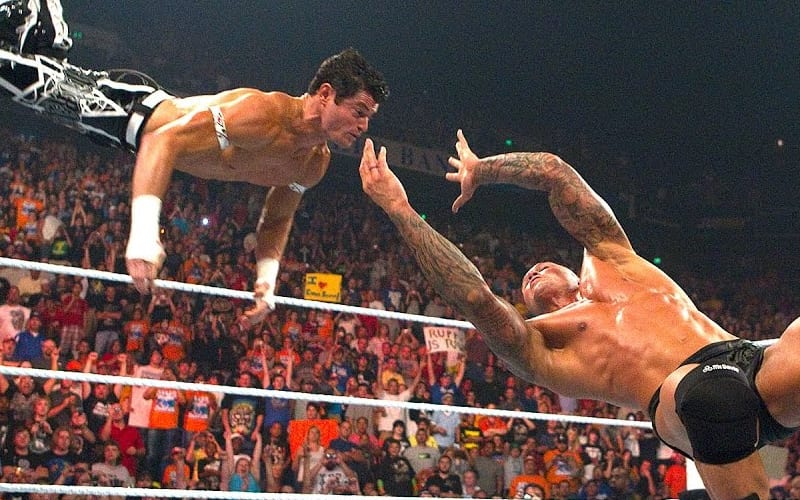 Matt Sydal made many memories as a part of WWE, and beyond. One moment that fans will remember forever was actually a move Sydal did as Evan Bourne where he took a devastating finisher.

The spot where Evan Bourne was caught with Randy Orton’s RKO has been replayed time and time again. As Sydal recently spoke with Wrestling Inc, he recalled that moment as the artistic and perfect shot that hit was.

He couldn’t take all the credit for the move. Not only did he need Randy Orton to execute it perfectly, but WWE’s production crew was also on top of their game.

“I don’t want to take all the credit for it. One, not my idea, and two, if you watch the way it was filmed, it was filmed perfectly. It was shot flawlessly. Randy goes down. They cut to me climbing, but the climbing shot is super super tight. You almost forget that Randy’s there. He’s out of the picture, and it’s not until I jump that they cut to the second shot. And then you can see Randy popping out of nowhere and catching me. It was art. It was masterfully shot.

“It was just the perfect moment, and I mean every single night, we go out there and try and create a moment like that. Every single night, you try and make that magic happen, but this one, all the stars lined up. Randy was perfect. My jump was just where it needed to be. The guys behind the scenes had it orchestrated so beautifully that all I had to do was jump and the rest wrote itself.”

It takes a lot of things to work just right to pull off a maneuver like that. Randy Orton is known for popping off RKOs outta nowhere. The one he hit on Evan Bourne is certainly one that fans will remember for a long time to come.