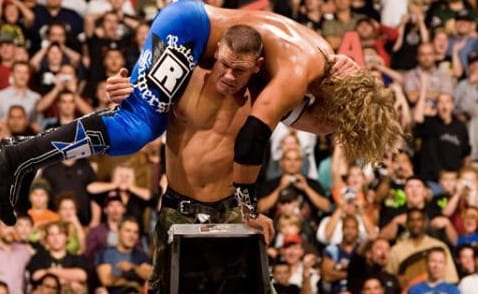 When you think of the best feuds from the noughties in WWE, John Cena vs Edge is one of the first that comes to mind.

They’ve battled over the WWE Championship, World Heavyweight Championship and nothing more than pride, and along the way, they had some magnificent matches with one another.

In many ways Edge helped to take Cena to the next level, and it’s clear to see that Cena appreciates that.

The John Cena/@EdgeRatedR rivalry is one I look back on fondly. The story, the matches, and most importantly, the fan’s response in Boston, Toronto, and at home made it so special. Kudos to the @WWE docs team on #WWEUntold. Watch it now on @WWENetwork!

It’d be great to see these two old foes square off one last time now that the Rated R Superstar has returned to the ring, but either way, their many great matches will forever stand the test of time.

Neither is active on a full time basis, but that won’t stop them from putting on another clinic.