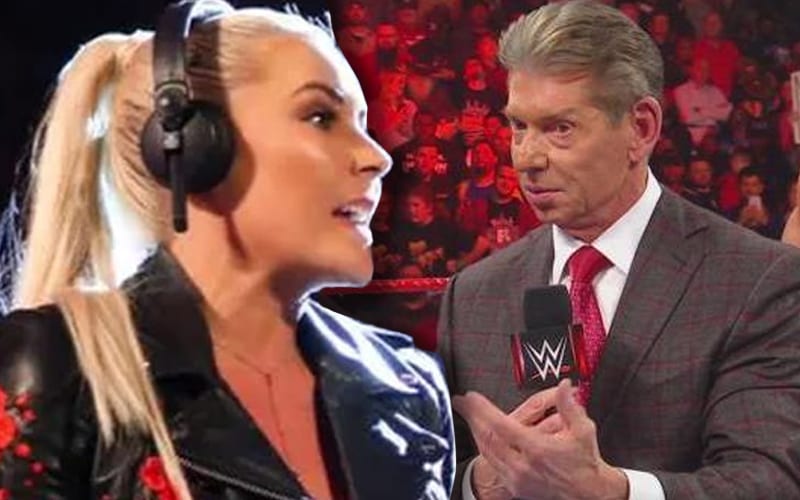 Renee Young is no longer in WWE. She left the company following SummerSlam, and now she is preparing for her next goal in life. She will never forget the time she spent in Vince McMahon’s company, especially the first time she met the Chairman himself.

Young could end up in another pro wrestling company like AEW eventually, but she has a strict 90-day non-compete clause. That’s not likely to happen in the near future, but you never know what can happen in pro wrestling.

As Renee Paquette spoke to Sunday Night’s Main Event she revealed that she certainly didn’t know what to expect in WWE. During one of her first days on the job, she showed up without any makeup on. Then she was told that Vince McMahon should never see her without makeup after she accidentally committed this faux pas during their first hallway meeting.

“The first time I met him – and he would not even remember this. It was very meeting-in-the-hallway, and I shook his hand and whatever. We were in Hershey, Pennsylvania, I was brought in to TV and I got to the building early, as one does when you’re new. I was used to our world of acting auditioning where you show up fresh faced then change and get ready for the show. Then I realized that’s not really the deal, and you should show up looking nice with a full face of makeup on.”

“Little me is walking around backstage with a clean face, squeaky clean, and he comes walking down the hallway, and I’m like, ‘Hi!’ And I don’t remember who it was with him, but they said Vince should not see you without makeup on. You should be fully done. He did not react in any poor way or anything, but I remember being like, ‘Oh, I didn’t know that. I thought I came here and I would go into makeup, so why would I already have makeup on?’ It was very weird. He would not remember that, but I just remember that happening and I had not a clue that that was how it’s supposed to work.”

Renee Young’s job changed a lot while she was with WWE, but she likely remembered to always keep makeup on whenever she was at risk of running into Vince McMahon.

Now Renee Paquette is at home with her husband and her dogs ready for her cookbook to drop while her phone rings off the hook with offers.