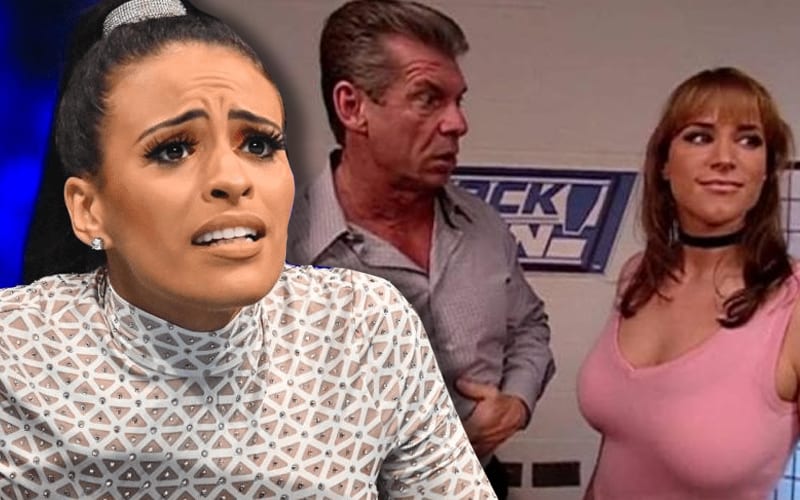 There are a lot of people who Vince McMahon can compare someone to. Having The Chairman Of The Board say that you remind him of one of his children isn’t the worst thing in the world at all.

Zelina Vega recently spoke to D-Von Dudley on his Table Talk podcast. During the conversation, she revealed a very interesting tidbit. Apparently, she reminds Vince McMahon of his own daughter Stephanie McMahon.

Vega revealed that McMahon told her the way that she is “always working out there” makes her a “cutaway machine” because they can always go to Vega for a good reaction.

“It’s weird because I think that too and I’m like, you know what? If quarantine didn’t happen – not saying that I wouldn’t have had these opportunities – but maybe it would have taken a little bit longer. And also, Becky’s having her baby so there are people that are not here so that just leaves spots to fill and for me, I’m like, ‘Give me the ball! If I drop it, screw me!’ But you lose nothing and I was always ready for that and I think it started with Drew [McIntyre] when we had that back and forth. I was like, ‘Man, he’s like my other promo half.’ It was just perfect.”

“Whenever it happened, it was just magic with him and it’s interesting because before even quarantine happened, Vince would always say, ‘You’re one of my favorites. You’re one of the reasons that I watch RAW. I love your character.’ It was such an honor to hear that because one of the things that he used to say to me was, ‘You remind me of Stephanie because she was always working out there. You’re a cutaway machine. I love that about you’ and first of all, I was like, ‘Are you serious?’ Legit, I was going to cry. I love Stephanie. She’s a huge inspiration when it comes to me and the Zelina character, but it’s wild to think that if this quarantine didn’t happen, I wonder where I would be. I wonder if I’d be getting a RAW Women’s Title shot against Asuka.”

Zelina Vega is now getting a shot to actually wrestle. She walked up to Asuka and made her presence known in a big way as she slapped the taste out of the RAW Women’s Champion’s mouth.

A Clash of Champions title match isn’t “set in stone” just yet, but odds are Vince McMahon will continue using Zelina Vega in some respect as she continues to deliver.