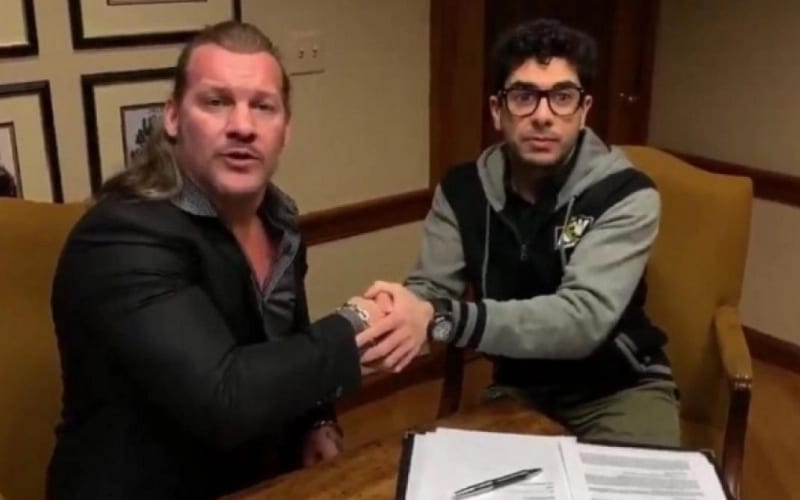 AEW opened their doors and many people looked suspiciously at Tony Khan as an outsider coming in with millions of dollars to start a pro wrestling company. He has proven to be more than just a fan with a billionaire father.

Inside The Ropes recently spoke to Chris Jericho where a number of things came up in the conversation. First off, he suggested that NXT “retreat” to Tuesdays. He said it’s getting embarrassing at this point. He also defended Tony Khan for being a good boss.

Jericho made it clear that Tony Khan is not a “money mark.” He’s actually running the show in AEW. He is open to discuss new ideas, but in the end he’s the one calling the shots. This is unlike Vince McMahon who is quite set in his ways.

“One thing about Tony is he’s very driven, and he’s very passionate and he knows what he wants. He’s not a pushover in any way shape or form. I think that’s kind of a misconception for a lot of people about Tony Khan. ‘He’s a money mark, and he doesn’t know anything.’ He does know. He knows more about wrestling than I do as far as the history, and the dates, and the matches and all that sort of stuff. I love working for Tony Khan because it’s fresh [and] its new. I loved working for Vince McMahon as well, but Vince, he’s been doing it for 45 years. He’s set in his ways of doing things, and they’re very successful. Tony’s still figuring out what way he wants to do things. We’re learning all together. We’re learning on the fly.”

“I mean we did a live TV show with 75% of the roster who had never been on live TV before. ‘Who’s going to produce the shows Tony? ‘Who’s going to write the shows?’ All of us. ‘OK, well, who’s gonna direct the shows?’ Keith Mitchell has been doing this for 30 years. We have a great group of people who are all doing this for the right reasons because they love the business, and they love this of brand new brave new world that we’re creating. So Tony to me is my boss. Obviously, the buck stops with him, and I appreciate that and I enjoy it. You have to have a boss. I worked in companies where there wasn’t a boss. That never works.”

“Tony Khan is the boss. I’m saying it right here. It’s not The Young Bucks. It’s not Kenny [Omega]. It’s not Cody [Rhodes]. Tony calls the shots. He’s got the final say, but he’s very open to suggestions. I talk to Tony Khan every day about ideas for the show, about live shows or advertising or press or action figures, and that’s a really cool environment because I’m getting a chance to use my 30 years of experience in a positive way and not being kind of undermined because I’m just ‘talent.’ I’m as much as part of the office as anybody is, and I think that’s a lot of fun. It’s very challenging in a great way for me.”

Tony Khan also hasn’t put himself on television very much at all. This week’s edition of AEW Dynamite featured a cameo for Tony Khan, but it made sense in the story. The Young Bucks tossed $10,000 at him to pay their fines and they walked off while he looked confused.

We’ll have to see if Tony Khan starts to appear on AEW Dynamite more often, but that’s not what he started AEW to accomplish. Chris Jericho obviously likes what they’ve been able to do so far and it means a lot coming from him.