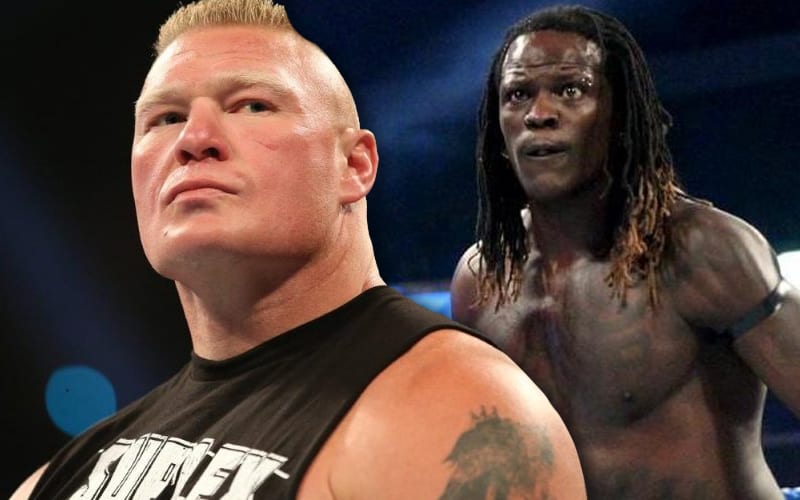 Brock Lesnar commands a top dollar contract and his dates are limited. There is a special reason for each time Lesnar is used in a WWE ring. He has locked up with some of the biggest names around today, but he really wants a match against R-Truth.

Lesnar and R-Truth shared the ring during a pretty funny encounter. Paul Heyman told Truth that they had a bet that he couldn’t make Brock Lesnar laugh, and Truth won that bet.

While speaking to TalkSport, R-Truth revealed that he had a conversation with Brock Lesnar backstage that went very well. Lesnar suggested that they should work with each other after that. It hasn’t happened yet, but R-Truth is still more than ready for the opportunity.

“The magic just went on man, it kept going on. And after that segment was over, we’re in the back and Brock was still laughing. He said ‘Bro, we got to do something together. There’s something there. I don’t know what it is, but there’s something there’. And we left it there. I know that’s something we can always go back and pick up. But that is one of the highest moments in my career right there.”

Brock Lesnar and WWE no longer have an active deal. Odds are he will sign a new contract once Vince McMahon offers him enough money. Bellator apparently called the Beast Incarnate as well.

We previously reported that Brock Lesnar was pitching ideas to work with R-Truth again, but nothing came of that yet.

We’ll have to see what the future holds for Brock Lesnar, but if WWE offered him a program with R-Truth it couldn’t hurt negotiations.