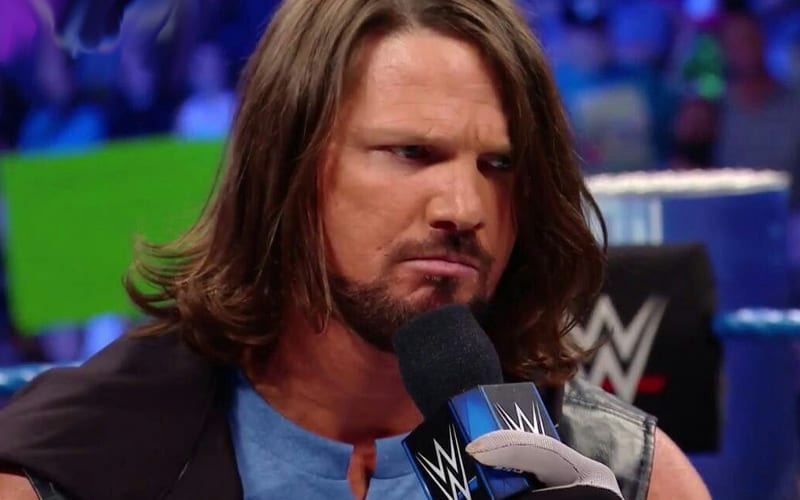 AJ Styles was on RAW, but then he asked to be moved over to SmackDown because he couldn’t stand to be around Paul Heyman. That request was granted, and then Heyman was fired from the Executive Director position which made Styles’ request a moot point. Then WWE moved to the ThunderDome and Styles’ Friday nights were booked with a live television taping.

Styles isn’t happy about missing his son’s high school football games. He’s not happy about that at all. He would much rather be there than in the Amway Center.

During Wrestling Observer Radio, Dave Meltzer brought up the “tantrum” that AJ Styles threw to get moved over to SmackDown. Then he mentioned how Styles is angry because he must miss his son’s high school football games. This is very important to AJ Styles, but he had to have known what night of the week Friday Night SmackDown aired.

“You talk about what kinda foresight is this when it’s like you throw a tantrum which basically he did that you’ve got to get off RAW and go to SmackDown and now you’re on SmackDown which tapes every Friday night and now you’re mad that you’re missing your son’s high school football games because they’re on Friday Nights.”

AJ Styles likely had no idea that WWE would suddenly start taping live on Fridays every week. They were taping on Monday and Tuesday for the most part. This is still something that he’s not very happy about.

Styles also might not have even known that there was going to be high school football due to the COVID-19 pandemic. Now there is high school football for his son, but he’s unable to attend games. Styles is simply too valuable to the blue brand for Vince McMahon to write him off television for that reason.