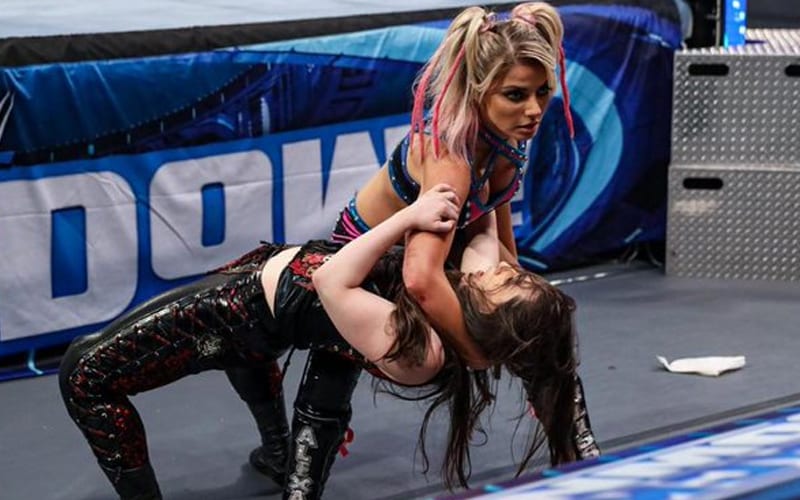 Alexa Bliss’ character is going to a dark place. This was very apparent this week on WWE Friday Night SmackDown.

Alexa Bliss took part in a #1 contender’s fatal 4-way match on SmackDown this week, but she didn’t finish it. Instead, she nailed Nikki Cross with a Sister Abigail on the outside of the ring, and she left. Click here to see that spot.

Plenty of fans freaked out after this spot where Bliss borrowed Bray Wyatt’s finisher. She didn’t make any public statement on the matter, but the tweets she liked on Twitter seem to tell all.

Bliss liked several tweets that pointed toward her transition into the Firefly Fun House realm. One tweet that Bliss liked was quite humorous as a fan wrote:

Michael Cole: it looks like the fiend isn’t having any affect on Alexa Bliss tonight

The fiend: hold my head lantern

Bliss also liked a tweet with #LetHerIn included in it. This was certainly an interesting step for Alexa Bliss to take that seems to confirm fans’ suspensions that The Fiend’s lasting impression has changed her more than just a little bit.

Nikki Cross also made it 100% clear that she’s not giving up on Alexa Bliss.

You can check out the screenshot below that shows a few of the tweets that Alexa Bliss liked following this week’s episode of WWE Friday Night SmackDown.