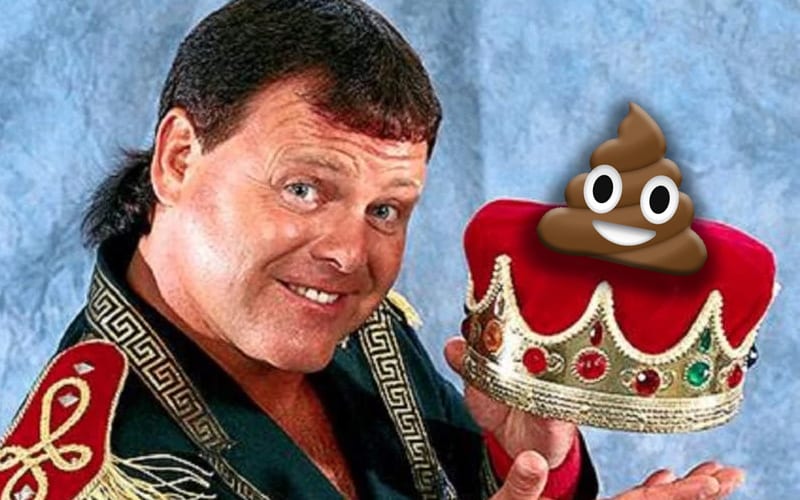 Jerry Lawler had a long career before coming to WWE. He sold out Memphis many times and had feuds with many including a famous one with Andy Kaufman that was immortalized in the film Man On The Moon. His transition to WWE wasn’t the smoothest to a certain extent.

While he spoke to Steve Austin on the Broken Skull Sessions, Jerry Lawler revealed one incident that almost made him go back to Memphis.

Someone crapped in his famous crown one night. Jerry Lawler said he understood why someone might not love him being in WWE, so he offered to McMahon that he could just go home if that was the case. It turns out that speaking to McMahon was enough to handle the situation.

“What had happened was there were a lot of guys that had worked for Jerry Jarrett and me in the past down in Memphis and you know how things go with them. Your life—your shelf life—was only so long in the territory so guys would come in and eventually, you’d have to give them their notice or fire them and let them move on to another territory. So, when I came into the WWE, there were several guys that had worked for Jerry Jarrett and I that didn’t have fond memories. They either felt like they didn’t make any money down there or they felt like they got fired for no reason or that sort of thing, so there was some animosity towards some guys.”

“There was a little incident that happened one night, I came back, we were going back to the dressing room and Jimmy Hart—Jimmy Hart was a great friend of mine and still is today—comes running in and says, ‘King, don’t go in there! Don’t go in and look at your crown.’ And I said, ‘What are you talking about?’ and he said, ‘Somebody took a crap in your crown…’ and so I said, ‘OK’ and I went right in and talked to Vince. I said, ‘Hey, I can understand why there’s some people that are not going to take a shine to me right away and so if that’s the case, I don’t have to be here, I’ll go back to Memphis. And he said, ‘No, I promise you nothing like that will happen again’ and sure enough from that time on, there was no problem.”

Nobody crapped in The King’s crown again, and it sounds like they left him alone after that. Vince McMahon also never really gave Lawler that many problems with his commentary by barking orders at him either.

Sometimes it is hard getting along backstage, especially when baggage comes with you. Luckily, Jerry Lawler was able to sort out that crappy situation in a hurry before things got too out of hand.