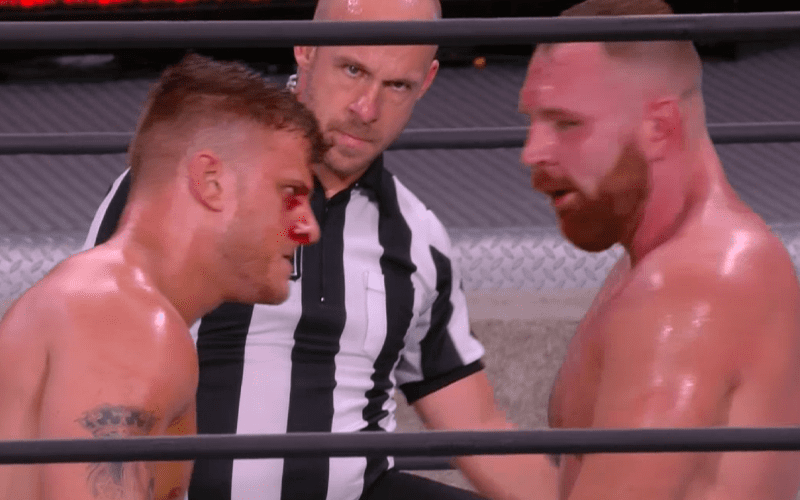 AEW All Out featured a main event between Jon Moxley and MJF. That bloody brawl ended with Mox hitting a Paradigm Shift despite it actually being banned. MJF’s attorney Mark Sterling is probably looking into that. One climatic moment in the match saw the two stars battling on their knees as they traded shots back and forth. Former sports entertainment referee Jimmy Korderas couldn’t help but notice the referee between them.

AEW referee Bryce Remsburg was so proud to officiate his first AEW World Title match, and he should have been. He tweeted out: “My first date with pretty platinum. My first PPV main event. The biggest match I’ve ever officiated.”

When Jimmy Korderas saw Moxley vs MJF his apparent advice to Remsburg would be to stop selling punches like you’re the one being hit. During a recent Reffin’ Rant, he elaborated on the matter.

“This thing was working fine and then there was that one spot where they were underneath, fighting back and forth tooth and nail and the only thing I noticed was the damn referee between them selling every move they made like he was getting hit. Look, it’s not about you, you stay out of the picture get out of the way. All I could focus on was his bald head bouncing back and forth — and I know about bald heads, trust me.”

“You know what, it’s not your job to get yourself over in a main event match. Leave it to the main event players.”

We’ve watched the clip back, and Remsburg’s head does move a bit, but he’s not “selling” the punches. His head does move back and forth on the quick exchanges, but he has to keep his eyes on the wrestler’s fists as the official. Jimmy Korderas would still probably offer a few pointers.