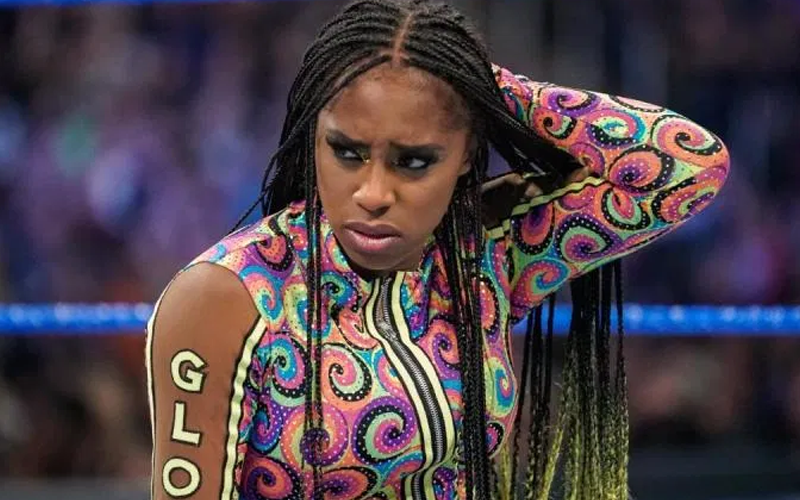 Naomi wasn’t being used to her full potential and fans wanted WWE to know about it. #NoamiDeservesBetter went wild online and WWE noticed, but it was out of Naomi’s control as to how they handled that wave of support.

Naomi isn’t the first Superstar to get a ton of fan support. Sometimes it works out for that Superstar as it did with Daniel Bryan. Other times, it goes nowhere and WWE simply waits for fans to stop chanting “Rusev Day.”

While speaking with TalkSport, The Glow discussed the frustrating part of the entire situation. She said the support is good, but she’s still tied down to whatever WWE books her to do.

“That’s the frustrating part. Because there is so much that is out of my control and out of my hands. Some things I’m just tied down to and can’t do or can’t say. But, the support is good. Even the constructive criticism I appreciate. The negativity just fuels me to be better and help me grow. I wanna fix any holes in my game and just continue to grow and evolve. But, it is a lot and it is overwhelming sometimes. Taking it in, like all the, time is a lot. Sometimes I have to step away and take a break. I try to stay positive because sometimes it can weigh you down, but it’s not something I run away from.”

“Social media is a big platform and you got to take the good with the bad. I just try to keep that balance, but I definitely appreciate the trends, support and just the conversation because I’m just one person. I can vouch and say we should go this way, we should do this, we should do that. That can be ignored. But what you can’t ignore is the masses and the thousands and thousands if this continues to trends. That’s when it matters and it has an influence. Although some don’t think it should and some don’t think it matters, that’s probably one of the biggest tools we have as talent these days.”

“Those trends really matter and change our course of direction at times. You don’t get to choose when the fans matter or don’t matter and I think, especially in this pandemic right now, that’s one of the biggest ways we’re connected with our fans right now. If enough people keep saying something, you gotta take heed to it at some point.”

There is a rumor that Naomi is in for a push. We’ll have to see if WWE finally does something with her. Her skill, worth ethic, and huge fan support should be plenty enough of a reason for WWE to give her a bigger spotlight.