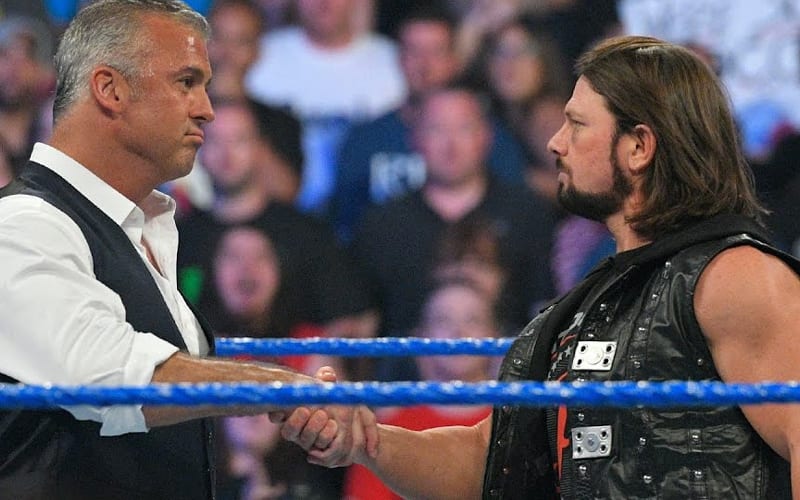 AJ Styles and Shane McMahon have been to war at WrestleMania, but Styles still realizes that McMahon might be the right fit to take over for his father Vince McMahon when the time comes.

The Chairman of the Board is now 75-years-old, but he’s still in great shape. McMahon isn’t slowing down and keeps the same routine he always has. Things might have changed a bit for him due to the COVID-19 pandemic, but it altered everyone’s lives.

During his Twitch stream, AJ Styles discussed who should take over for Vince McMahon when the time comes. He said that if anybody can take over for Vince it’s his son Shane. Triple H is always a possibility, but it would be tough no matter how they go about it.

“Listen, if anybody can do it, it’s Shane McMahon. There’s also Triple H, but he’s got his hands full with NXT. If they did that, it’d be great for RAW. There’s so much that goes into it and you don’t really understand it until you’re there and going over everything. It’s a lot to take on. It’s tough.”

“I love Shane. There’s nobody better. When he puts his heart and soul into something, he really gives it all. I’ve been in the ring with him, so I know. If we’re talking about a match that exceeded everyone else’s expectations, it’d be my match at WrestleMania against Shane McMahon. Nobody expected that to be what it was and I thought it was awesome. Again, if the rumors are true that he’s going to take some duties away from Bruce Pritchard, I think it’d be great for all involved. It’s just too much for one person to do.”

Fans have often talked about what will happen if/when Vince McMahon can no longer perform his duties. Wall Street has wondered about that as well. The company has a lot of people they can rely on, but it takes a special kind of person to have the business acumen and pro wrestling knowledge of Vince McMahon.

Triple H recently said that Vince McMahon will outlive us all. That’s not the first time The Game has said that either, because it could be true. We’ll have to see what’s next for WWE, but there is no plan on replacing Vincent Kennedy McMahon Jr. any time soon.