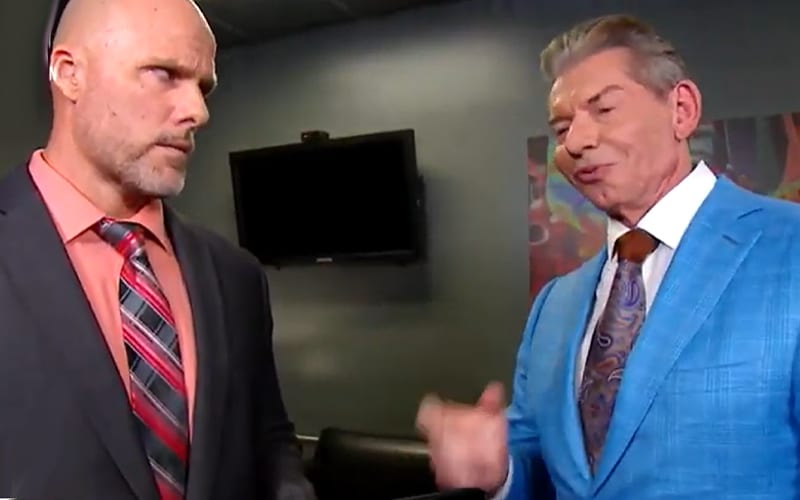 WWE fans have seen a lot more of Adam Pearce in recent weeks. Some have researched his pro wrestling career which spanned 19 years across numerous companies as well. He’s not wrestling in WWE as a producer, but he’s playing an on-screen role.

Adam Pearce has been given some big assignments on screen in recent weeks including securing all of the Payback triple threat match signatures. He also busted up his hand on an ambulance during Bray Wyatt’s big Fiend transformation angle.

While speaking to WWE The Bump, Adam Pearce explained his mindset about taking on these bigger parts on television. He rolls with the punches and doesn’t have time to worry about things because he doesn’t know about much in advance.

“You know if I knew what I was doing when I was getting to the arena it would have been more stressful, but when you kinda get into that mode where you gotta make things happen you just get moving. When the Chairman gives you your marching orders, you march. Didn’t have time to think about it. I just got in that mode to just do it and thankfully, I got it done, I think.”

Adam Pearce has received increased screen time in recent weeks, and there’s a reason for that. Not only is he excelling with every role they give him to play, but pro wrestling fans also like seeing Adam Pearce. He is a 5-time NWA World Heavyweight Champion who never saw a spotlight in WWE. Now he is a producer and getting screen time alongside Vince McMahon.

We’ll have to see what WWE has in store for Pearce next. Pearce certainly never knows what he’ll be stepping into when he shows up to work.