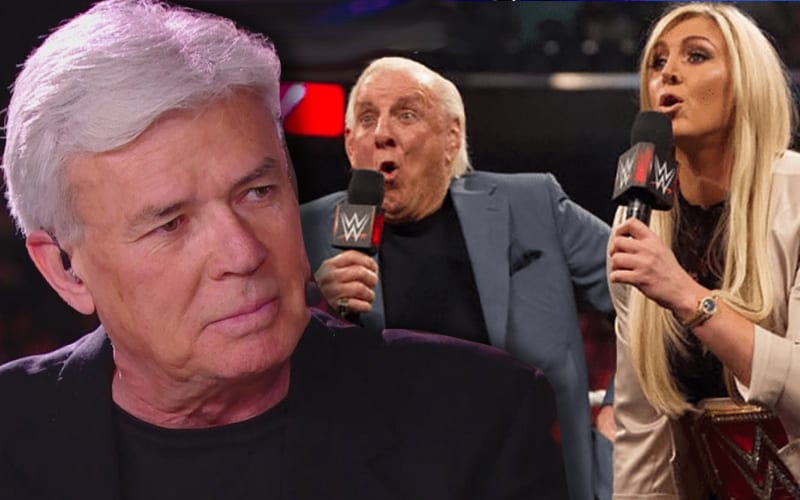 Ric Flair and Eric Bischoff worked together in WCW, but their relationship wasn’t famous for being the best. Years later, when Eric Bischoff was brought back to WWE as Executive Director of SmackDown, Flair’s daughter Charlotte apparently had some worries.

Charlotte Flair was younger when Ric Flair was in WCW and going through a terrible time with Eric Bischoff. This was something that apparently stuck with Charlotte Flair as she found her self in an uncertain situation when Easy E was brought to the blue brand.

According to the Nature Boy as he spoke to Wrestling Inc, Charlotte Flair was concerned that his previous dealings with Eric Bischoff might harm her status in WWE. Of course, that wasn’t the case, but Ric Flair said that is how his daughter felt about the situation.

“So when Eric got hired by WWE — and these are the kinds of things that really sit deep with me — you know my daughter called me who is arguably the biggest female star in the history of the business. She called me and said, ‘Dad, do you think it’s going to effect my career that he’s coming to work here?”

“I’m thinking about that like my daughter I’m hoping that she’s not remembering those days that I had to go through, but it’s the first thing that came to her mind, ‘Is he going to treat me like he treated you, Dad?’ How about that?”

Charlotte Flair didn’t lose her push in WWE. If anything, The Queen received a larger focal point. It turned out that she had nothing to worry about, but nobody could blame her for having a little bit of concern.

You can check out the video below for the full interview. Ric Flair discussed the conversation with Charlotte at around the 28 minute mark.