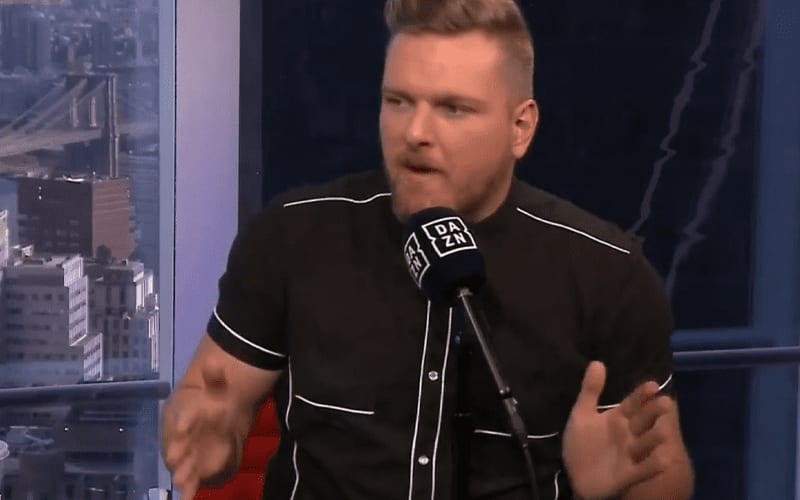 Pat McAfee wears shorts to practically every event. This is nothing new for him, so that was part of his attire at WrestleMania in New Orleans. Michael Cole had a huge issue with that and he chewed the former NFL punter out for good measure.

During After The Bell, McAfee spoke about his confrontation with Michael Cole. McAfee tried to look presentable for WrestleMania, but his efforts were not enough for Michael Cole.

“It was my first time doing a kickoff show.  Michael Cole called me a week beforehand.  He asked if I wanted to come down and be part of our NXT panel for NXT TakeOver.  ‘We saw what you did at the live event in Indianapolis a couple months ago and wondered if you would want to do that.’  I said yes.  I would love to.  However, I could be a part of this business, I would love to.  So shout out to Michael Cole for making that happen.  Then I go down there and commentators are always in a suit and tie.  Everybody is dressed very nicely.  That is not how I operate.  I don’t even know how to tie a tie.  I wore tuxedo shorts at my wedding.”

“The first time I went down there at WrestleMania Takeover in New Orleans, I had shorts on with a sports coat and a tie and a button down.  I said, I am business on top, party on the bottom.  I’m trying to set a precedent on how I am going to dress because if I go in there with a full suit, then that’s the expectation.  I don’t own enough suits to do that.  I don’t even know how to tie a tie.  I had Sam Roberts tie my tie the first time.  I finally got to the next WrestleMania in New York.  I got there and I was told leading up to it, no shorts.  You can’t wear shorts for this.  You are going to be on the WrestleMania Kickoff show on the USA network. No shorts.  I said I’m not going to wear shorts.  Don’t worry about it.  I get to WrestleMania.  I understand this is a big deal.  I’m pumped to be a part of it.  I go and get tailored.  This is one of my first times I went to a tailor.  I get this tux and tuxedo shorts made.”

“I get these very expensive shoes.  In my eyes, I put a real effort into this.  These are not shorts, these are tuxedo shorts.  Big people wear these.  I’m sitting around WrestleMania day wearing the same thing for 5 hours.  Now we are 30 minutes before showtime and Michael sees me for the first time and he starts chewing me out.  In hindsight, I understand.  WrestleMania is a lot of pressure on Michael Cole.  The last thing he wants to deal with is one of his commentators being the reason he gets yelled at by Vince for ruining a kickoff show.  In hindsight, I know that.  But at the time, I had been there for 5 hours sweating my ass off.  I’m excited and pumped to be there.  He starts yelling at me saying I look unprofessional.  I look at him and think, who are you talking to?  He was mad.  He was not happy with me.  He said no shorts, he never said no tuxedo shorts.  I tried to explain that to him but at the time.  I got sent back in the dressing room after there was quite a bit of take between me and Michael Cole.  He had to go talk to Vince because I had no other backup.  I had no other clothes.  We were 20 minutes before showtime so there really was nothing anybody could do.  They had to go ask Vince if it was ok.  I was told that Vince’s words were, I’m hip.  He looks good.”

Michael Cole eventually got over it, but if it was anyone other than Pat McAfee breaking WWE’s on-screen dress code things might have been much different.

Pat McAfee stated that his time in the ring might be over. Then he seemed to leave the door open for a possible future match against Triple H. We’ll have to see what’s next for Pat McAfee and WWE, but they’re likely to let him wear whatever he likes.