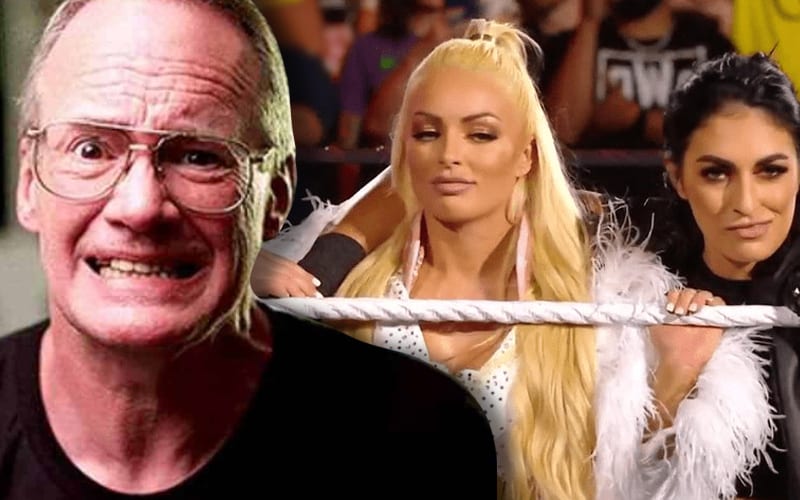 Sonya Deville thankfully escaped a very dangerous situation when a stalker invaded her home. A man named Philip Thomas II was stalking her online for years, and he planned his heinous attack for eight months. Deville is okay now, and at the time the police reported she had a guest in her home. When it was revealed that Mandy Rose was that guest things got very interesting.

Deville and Rose were involved in a heated SummerSlam feud at the time. The two are long-time friends, but they were also in a hair match at the biggest party of the summer.

Jim Cornette went off about this on his Jim Cornette Experience podcast. Cornette called for Rose and Deville to be fired for breaking kayfabe. Obviously, his old-school mentality called for it, but then he backed off his initial point a bit.

Cornette stated that WWE should have at least fined Rose and Deville for being caught together in that situation. Another alternative would be to wait about six months for the “heat to die down and then fire them.” He also chastised Deville for taking Rose to the police to begin with as he alluded that Sonya Deville should have kayfabed a very real and scary situation.

Mandy Rose lives in Fort Lauderdale and she stays with Sonya Deville when she’s in Orlando. WWE has required their Superstars to be in Orlando quite a lot in recent months.

Obviously, WWE isn’t going to fine or fire Sonya Deville and Mandy Rose. Still, in a different era of professional wrestling that would have been a very good possibility, regardless of the situation. Some territory bookers fired wrestlers if they lost a bar fight, not to mention if they were caught letting their hated enemy sleep in their guest room.