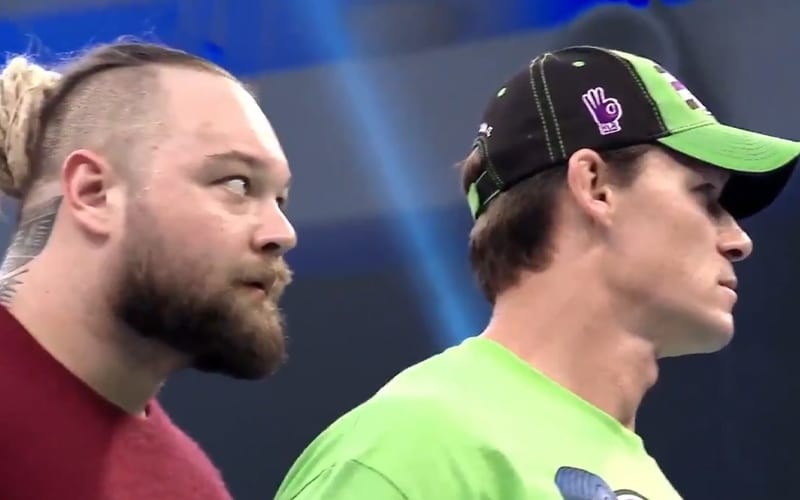 John Cena and Bray Wyatt have been to war in the past. They also battled through a demented and chaotic Firefly Fun House match at WrestleMania 36. The two obviously work well together and have performed many house show matches as well. Now Wyatt can watch from his top spot in WWE as Cena takes on Hollywood.

John Cena’s character in the next Suicide Squad movie was just revealed. He will likely make a great Peacemaker. Bray Wyatt just won the WWE Universal Title, but he is in for a tough triple threat title defense at Payback on Sunday.

While speaking to ESPN, Bray Wyatt was asked about Cena. Bray Wyatt called Cena a “sweet guy,” and then he discussed how great it feels to receive praise from the 16x World Champion.

”John’s such a sweet guy, isn’t he? What a sweet guy that John Cena is. What a sweet, sweet guy. I’ve been through so much with John Cena, you know, it’s amazing to me to see him, you know, from the star he always was turned into this gigantic movie star. And John is very much the type of person you have to earn his respect. Because he doesn’t just give it, he’s very forward that way. So hearing that praise, for me and Seth [Rollins], it’s a big deal because, like I said, John is this huge star. That’s a milestone, for me and my legacy, I think it’s pretty neat.”

We’ll have to see if John Cena and Bray Wyatt ever re-visit their feud. They seemed to tie things up nicely at WrestleMania, but you never know what can happen in WWE. It seems that both Cena and Wyatt would be up for it provided Cena isn’t needed for another big budget Hollywood project.