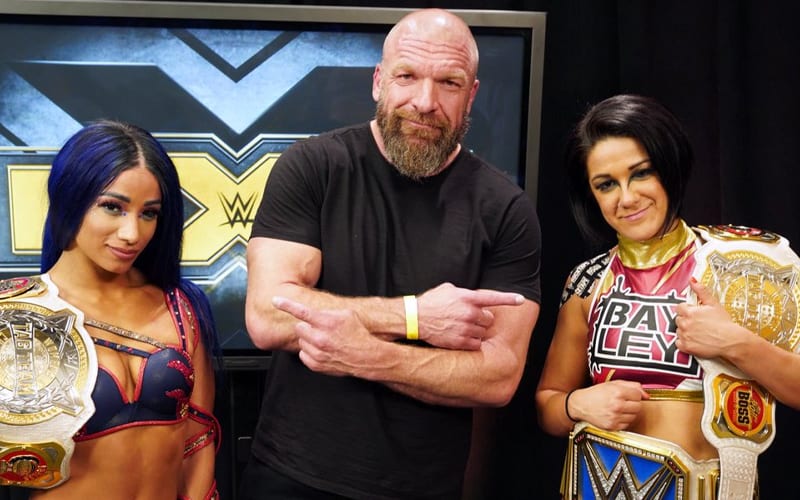 Bayley and Sasha Banks are known to show up on multiple shows within the same week. It’s nothing for them to show up on NXT along with the main roster. Banks calls herself Sasha 3 Shows for a reason.

During the post TakeOver conference call, Triple H spoke about Sasha Banks and Bayley. They love NXT and are willing to show up any time they are in the area. Fortunately for them since WWE is taping so much content from the Florida area they are around much more often.

“So I break this down, a lot of times, to passion, and the thing that I respect the most is anybody that is super passionate about this, it really just sticks with me.”

“And when people like Sasha and Bayley, it doesn’t matter what we’re doing, if they’re in town and they’re here, I know I will get a text during that day from one of the two of them saying, ‘hey, can we come by tonight to say hello, to see everybody and hey, maybe can you put us on the show. Would love to do something too. Oh, by the way, if you want us to work, we’re happy to do that too. Oh, by the way, if you need us there on Wednesday, we’ll show up for that too.’ I mean, they love this, and their passion to want to come here and be a part of it and contribute to it and contribute to the future of it, and they come here and they see everybody that’s here. Just seeing them lights me up when they’re here. It really does.”

We’ll have to see when Sasha Banks and Bayley show up in NXT again. It sounds like they have a way of getting themselves on the show. Triple H also doesn’t seem to mind giving them some time on his program whenever he can.