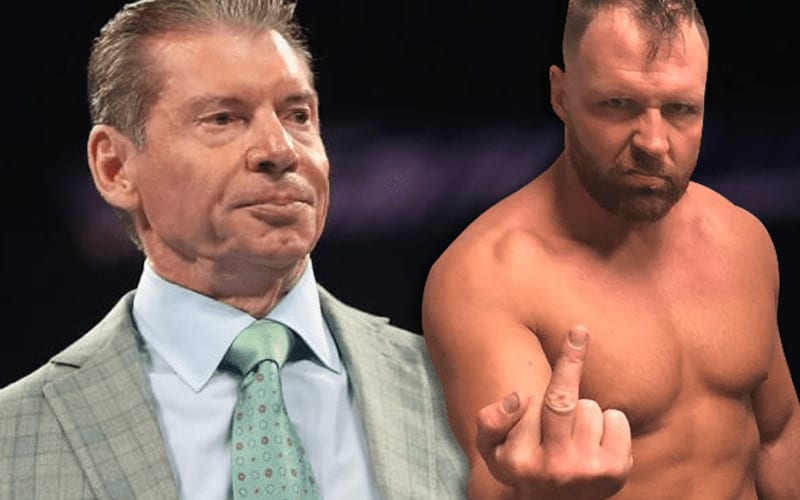 Jon Moxley left WWE, and he knew that was his decision before AEW was even on his radar. Now that he left WWE he can watch the product from the outside in, and it pisses him off.

Moxley recently sat down with Wrestling Observer Radio where he discussed what is wrong in WWE. He didn’t want to bury the company, but he did point out a big problem with the company, and that’s who is running it.

Moxley stated that whenever Vince McMahon leaves things will likely improve. Until that day happens watching WWE programming might continue to be a painful experience.

“We know what their problem is. It’s one person, three letters: V-K-M,” Moxley said. “That’s the problem. Until he’s gone, or relinquishes control, it’s just not gonna change.

“When I watch the show during the pandemic era, I’m just like, ‘Oh thank God I’m not there. Jesus Christ.’ I mean, what would I be doing on that show right now? Can you imagine? You think it would be any good? Like, come on.”

Moxley doesn’t want WWE to fail. He wants WWE to be awesome and produce great content. He loves pro wrestling, and it upsets him that the world’s largest pro wrestling company is producing such content.

“I want WWE to be awesome. When WWE sucks at this point, I don’t get excited, like, ‘Ha ha, you suck’, it kinda pisses me off. Because they’re the number one brand in the sport. They represent the sport to a lot of people. And when their product is embarrassing to watch, it makes all of wrestling look bad.”

“And it’s like, you’re driving away fans that could potentially be WWE *and* AEW fans. Like, I want wrestling *all* over the world to be awesome. The hotter it is all around, the better it is for everybody, right?”

WWE continues as a global superpower with loads of history behind them. The problem could be that all the attention on their past hasn’t given the company any time to focus on their future. This is an issue that could be a big problem for future generations as WWE continues to build for the years to come.

Thanks to Cultoholic for the quote