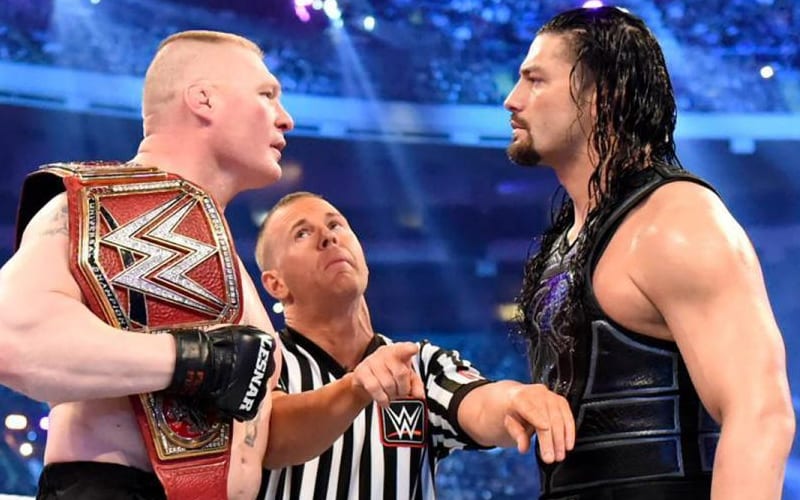 WWE is a large operation and there are plenty of documents floating around backstage. Not everything that happens in the company is written on a piece of paper. Some things happen that only Vince McMahon knows about beforehand.

The WWE ThunderDome brought much rumor and innuendo to the table. One rumor is that Roman Reigns and/or Brock Lesnar could be returning. It only makes sense as WWE wants to pull in more viewers.

WWE is in a strain for viewership, and we are still in the midst of a pandemic. Roman Reigns is in full quarantine, but some are speculating that a move to the Amway Center might provide WWE with a better chance to keep a fully functional television environment with social distancing in mind.

Ringside News has learned that Brock Lesnar and Roman Reigns are not on any internal roster list or scheduled for a return in September.

A writer very close to the situation has confirmed that Lesnar and Reigns’ names have not been brought up at all. Additionally, we were told that Roman Reigns and Vince McMahon are still talking. That being said, if a return happens, nobody knows about it.

“Roman has been in touch with Vince this entire time, but if they are doing anything with Roman it would be a total surprise and they would have kept it.”

Ringside News exclusively reported that Lars Sullivan is eventually coming back. His name is being talked about backstage, but there is still much uncertainty surrounding that situation.

Roman Reigns and Brock Lesnar’s names are not being brought up. It was told to us that “anyone saying it is going to happen is just saying something out of their ass because even the most top secret document doesn’t reflect it.”