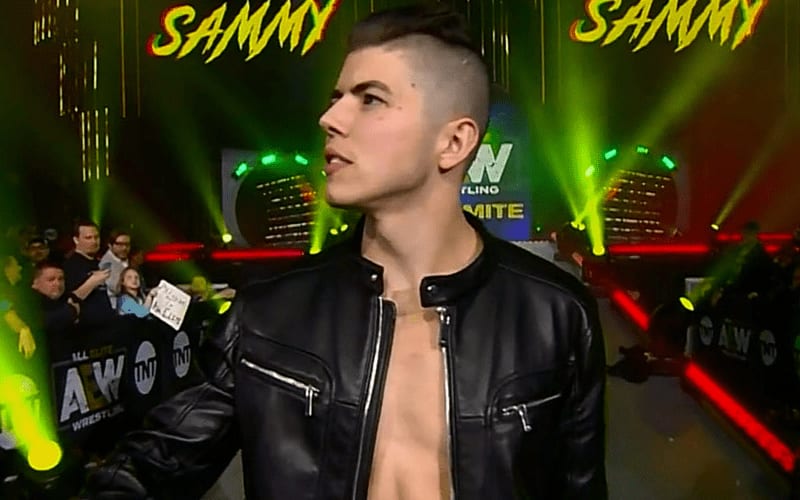 Sammy Guevara is just getting started in AEW. He was in WWE prior to that for a few dark matches and other extra work. This is when he was able to hit on Brandi Rhodes.

Guevara also had a chance to get some face time with Vince McMahon himself. It wasn’t easy, but he was persistent and made sure to tell Vince McMahon what he was in pro wrestling to do: make a lot of money.

During AEW Unrestricted, Sammy Guevara talked about how he got his meeting with Vince McMahon even when nobody knew who he was.

“I did dark matches on and off for WWE.  Eventually, I realized this is how they see me right now and that’s fine.  It’s up to me to go out and make a bigger name for myself.  One of the last times I was there, I thought screw it, I’ve done extra work many times.  I have to do something else.  I had the idea that I was going to go to Vince’s office.  Screw it, I’m going to Vince’s office and at least introduce myself.  I’ve never met this dude and I’ve been here and doing extra work for the past two years.  I went up to the door.  It’s always crowded and I thought it’s not going to clear out.  It did clear out and I have to do this now.  My heart starts racing.  I knock on his door.  I hear a loud, come in.  I opened the door and Vince was not there.  It was some dude on the computer and there was Road Dogg.  I thought, where is Vince?  Road Dog is looking at me like, what the hell is this guy doing in here?  I said my name is Sammy Guevara.  I’ve been here many times and I came here to meet the boss man himself.  Road Dogg, without saying a word, gets up out of his chair and walks up to me in front of my face and says, the balls on you kid.  I like your moxie.  Vince isn’t here today but I strongly recommend you do this the next time we are here.  The next time we were there, I was prepared for that to be my last one.  I knock on the door.  This time, HHH answers the door.  He opened the door a little bit to show Vince and I squeezed myself through the door.  I went up to Vince and shook his hand.  I did my spiel to both of them.  I told them I want to let you know I’m going to make this business a lot of money.  Vince chuckled and asked me my name and said it was nice to meet me.  Nothing came from it.  I ended up getting a tryout later that year.  I don’t know if that was the reason or not.  I got the tryout and it didn’t work out.  When I was at the tryout, I saw a bunch of things where I realized this is not where I want to be right now or maybe ever.  I saw the way things were done.  I realized if you are not a model or a pro football player, it’s like screw you so I’m like, nah, I don’t want to be here right now.”

Sammy Guevara’s meeting with Vince McMahon didn’t amount to anything in WWE. It certainly gave him a great story to tell years later when he was a much bigger name in another pro wrestling company.