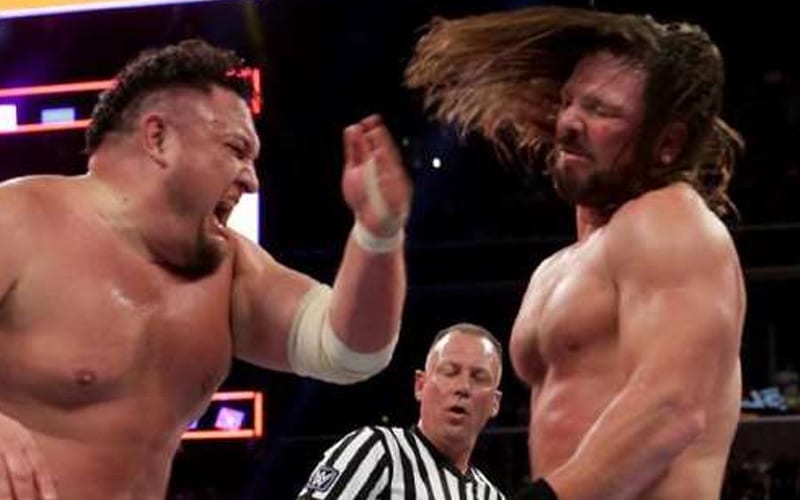 AJ Styles and Samoa Joe battled in TNA for years and then they found their way to WWE. That feud produced plenty of great matches, but AJ Styles says they’re not finished yet.

The two WWE Superstars are currently separated by brand lines. You can never rule out a move for Styles back to RAW since Paul Heyman is no longer an issue.

During WWE The Bump, AJ Styles discussed his ongoing feud with Samoa Joe. He said it’s wild to think about where they are in comparison to how long they paralleled each other’s careers.

“I remember talking to Joe when he was in NXT and how everything went and when he was gonna get hired and he was gonna be signing a contract. Who would have thought that we were both going to be in WWE at pay-per-view years later. It’s pretty unbelievable, it really is.”

AJ Styles was asked if he would like his rivalry with Samoa Joe to live forever. His response was affirmative as he left the door open for them to continue their feud in WWE.

“I hope so. It’s just it’s been going on for so long, right? Like you said Joe and I have been competing against each other for 15 years and had great matches with each other for 15 years, so I think it’s a rivalry that’s gonna last for a long time. I gotta say the rivalry we had a year ago, two years ago, it’s not over. It can come back.”

Samoa Joe is also out of action for the time being. He is still being used on television as an announcer, but a concussion during a television commercial took him out of commission.

Joe is incredibly valuable in the ring so it’s logical to assume he’ll get back to action as soon as possible. It sounds like AJ Styles will be waiting for him as well.