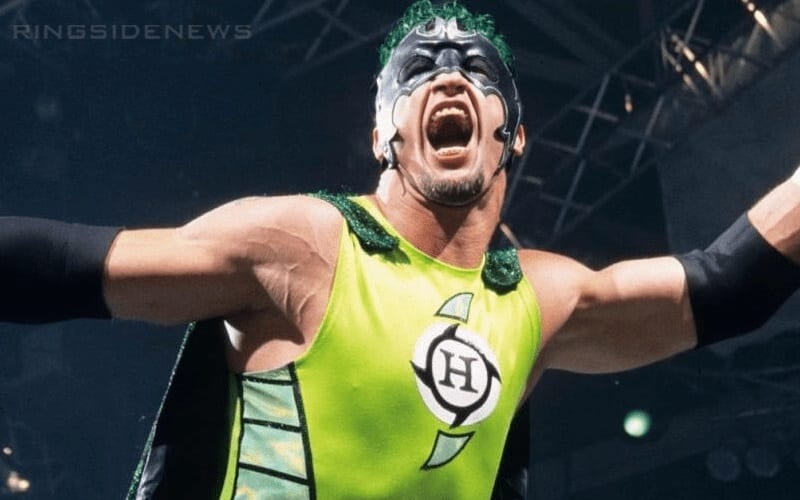 Shane Helms was having a decent run as Sugar Shane in WCW, but they didn’t bring the “Sugar Babies” with him to WWE. He wasn’t that over so WWE didn’t pay girls to dance with him to the ring. He also thought that his name would be changed because Shane McMahon is the only Shane in WWE. He was correct in that assumption.

Hurricane recently spoke to Tommy Dreamer’s Hardcore Podcast about the day when he was told that he couldn’t be Sugar Shane any longer. This happened after Booker T and Buff Bagwell’s notorious WCW main event on RAW that torpedoed any idea of a WCW spin-off show.

Helms revealed that his name wasn’t the only thing that WWE was changing around. The company wanted to completely overhaul his gimmick in a very different direction.

My first night, the first day, I’m told specifically, I can’t be Sugar Shane anymore.  I can’t be Shane and therefore I can’t be Sugar.  I can’t do the Vertebreaker.  I can’t have my entrance song which is the Vertebreaker.  I’m not going to have the girls and I’m going to lose the cruiserweight title.  As Stephanie was telling me this, she could see it in my face.  I’m so glad I was dealing with her and not some of the other producers who really didn’t give a sh*t.  She was really consoling and calming.  She said, I know it sounds like a lot but we like you and you will be ok.  It’s just what we are doing tonight.  Also, they wanted me to call me Gregory Helms.  They wanted me to be Hollywood Helms.  I didn’t want to be that.  I’m afraid if I say no, I might get heat.  I said I’m really not a fan of that.  I don’t have any power or any stroke whatsoever but I don’t want to be Hollywood Helms.  When you hear me talk, nothing about Hollywood springs to your mind.  Plus, there’s a guy that was just called Hollywood not too long ago and he was one of the biggest stars to ever have done this.  I don’t want to follow that.”

“If you Youtube the match, you can still see on my Titantron it says Hollywood or has some cityscape of Hollywood, CA.  On the flight home that night, I’m sitting with a notepad and was writing down all the names I used back in the day working indies.  I was going to come up with a list of names I was going to present to them the next week because it can’t be Gregory Helms.  I decided to be Hurricane Helms because I was the Hurricane Kid back in ‘92 or something like that, maybe early’93, but that was used briefly.  So Hurricane Helms is what I wanted to be.  The next week at TV, I get there super early.  I saw Stephanie because she was the one I was communicating with the most.  I told her I got a name, Hurricane Helms.  She said, you really don’t want to be Gregory, do you?  I said, no.  Gregory is my shoot first name but I’ve never gone by it.  I’ve gone by Shane, my middle name, and said I don’t think it has a hook.  She had the look that said, hmm, he’s not quite the dumbass we might have thought he was.  They went to the production meeting and a couple hours later, Vince walked down the hall and said, Hurricane Helms.  I like it.”

Hurricane Helms became a popular Superstar and he is still selling merchandise and getting action figures to this day. Helms was recently released from WWE as a producer as part of the big April 15th cuts, but he seems to be doing well. It makes us wonder if he would have had the longevity if they would have stuck with a Hollywood persona instead.