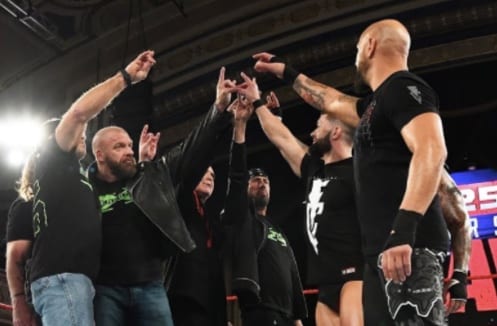 While Karl Anderson appears to be enjoying himself over at Impact, he certainly isn’t about to let go some of the grievances he feels from his time with WWE.

Back at RAW 25, Anderson was part of an intriguing moment when D-Generation X and The Balor Club shared a ‘too sweet’ in the wake of beating up The Revival.

One of the biggest missed opportunities in pro wrestling history

As it turns out, though, Anderson seems to believe that there’s a much bigger story to be told regarding that moment and what could’ve come from it.

Dax Harwood made his feelings on the matter known, before Anderson teased that he’s going to come out and talk about those who have upset him from his WWE days.

all the friends got to beat us up! Hit all the signature moves! Me and Cash left in gorilla while everyone else high fives! I punched a brick wall. Building to the future, babe!

At this stage you’d think it’d be water under the bridge, but we may not know the full details.