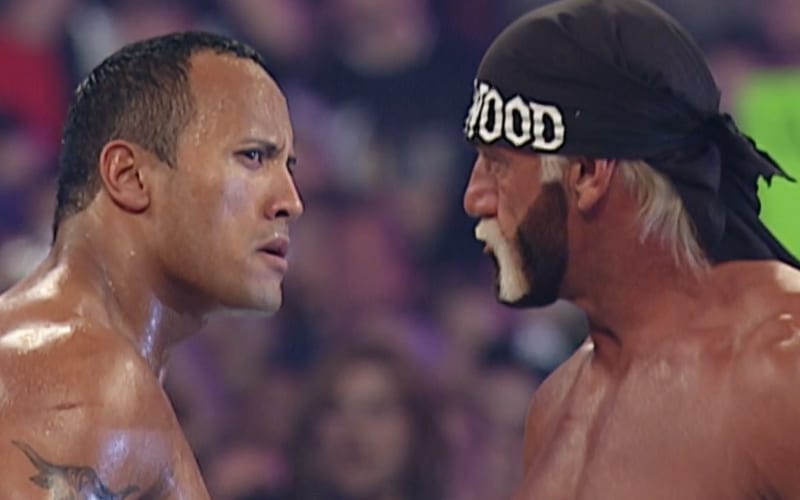 WrestleMania X8 took place on March 17, 2002, at the SkyDome in Toronto, Ontario, Canada. This mega card featured Hulk Hogan vs The Rock in an Icon vs Icon encounter. The match also didn’t go the way anyone expected.

Jonathan Coachman was there for the entire event and witnessed The Rock and Hulk Hogan’s feud evolve. This was a huge match with two legends, and although Hogan isn’t Coachman’s favorite person, he showed huge respect for the Hulkster as well.

The fans did not react as they thought which called for a double turn. Coachman revealed as he spoke to the Wrestling Chatter that the talking Dwayne Johnson was doing with Hulk Hogan in the ring had nothing to do with trash talk. The Rock’s expression might have been menacing, but he was really changing up the match.

“I will say, to this day, [it] is the single greatest hour of pro wrestling and sports entertainment in the history of sports entertainment,” Coachman remarked. “And I know there has been a lot of great ones but it’s one of two or three times that I can remember, and the other one is Triple H’s return in Madison Square Garden. That I actually walked out onto the floor to watch it with my own two eyes.

“And to know the greatness of The Rock and Hogan had nothing to do with this – and I don’t mind Hogan, he’s just not my favorite person. I mean, we get along but we’ve never been friends. But to watch them work for a week and put this match together, these two mega powers in the sport of wrestling from two different generations, and then to watch the crowd turn and not do what we expected them to do. And then for having The Rock be smart enough to change it while they were standing in the ring, and people thought they were talking trash to each other. In reality, The Rock was changing it because there are certain things you can do as a babyface and you can’t do as a heel, and there are certain things you can do as a heel that you can’t do as a babyface.

“To watch the brilliance in that moment, that was not too big for him because a lot of people don’t understand when you’re on national worldwide television, you know the red light’s on, you know there’s 80,000 people there, and you know there’s millions watching at home, that can be overwhelming from an anxiety perspective, nerves. And only a few people can really handle it. For The Rock to be in the moment, to hear, and to understand, and to feel, and to be able to change it, was nothing short of remarkable. And the show should have ended right there.”

That match will live on in WWE History because of the electricity and unique atmosphere of that WrestleMania moment. Most fans didn’t even realize that they had to craft the match on the spot as their reaction flipped the script in many ways.