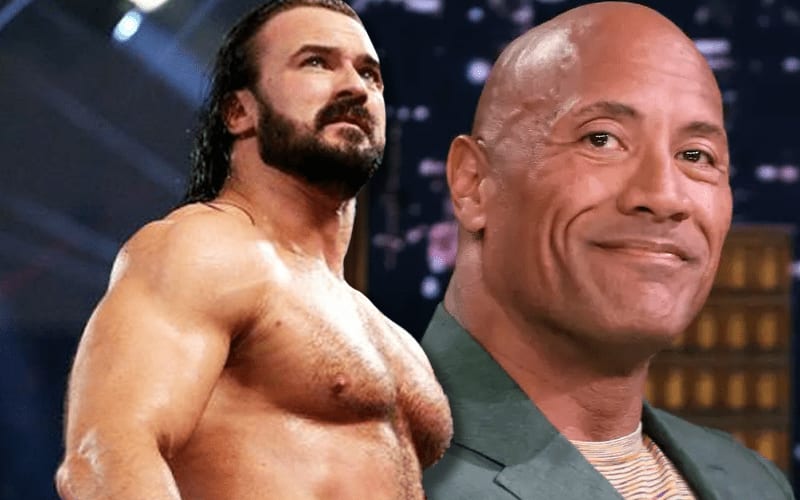 Drew McIntyre won the WWE Championship in front of zero fans when he expected 80,000. That moment in his career was dashed, but there will be plenty more major events to come in his journey through pro wrestling. He might even score a match with The Rock.

McIntyre and The Rock have thrown around some friendly banter about facing each other. Dwayne Johnson had some great praise for McIntyre as well. While speaking with the Glasgow Times, Drew McIntyre pitched his dream match against The People’s Champion.

Ibrox is an area in the city of Glasgow, Scotland which is where Drew McIntyre would choose for his confrontation with The Rock. He would also love it if WWE could arrange a WrestleMania event for the occasion.

“The Rock is the best, one of the nicest guys in the world and he deserves all his success.”

“There was a time I was doing nothing, really, and TMZ asked him who he thought was the next breakout star. And he picked me, which really inspired me and fired me up. I appreciated that and it gave me motivation. Then to see WWE posted an image of Dolph Ziggler with the title, and Rock backed him up! That hurt my one feeling I’ve got left.

“I thought, ‘What would Rock do in this situation?’ If this was 1998/99, what would he say? I thought, screw it. I’m the champion, I don’t back down to anyone, even The Rock. My phone exploded. I’d love to face The Rock anywhere, but if there was one place on earth it would be a WrestleMania at Ibrox. That would be great for personal reasons.”

“It would probably have to be Hampden, we’d need somewhere massive. If he chose to come back for a match, as the biggest Box Office attraction in the world, wow. Come on, Rock, give me that match.”

The Rock has a very busy career and he really can’t take risks like he used to in the ring. We’ll have to see if McIntyre vs Rock is a possibility down the line because anything can happen in WWE.

Do you think The Rock should return for a match against Drew McIntyre? Sound off in the comments below!