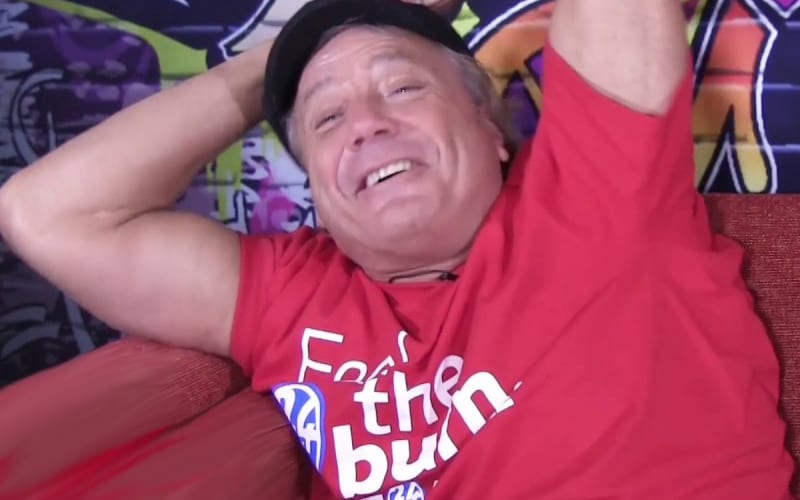 Update: Marty Jannetty has now stated that he actually burned the body of the man he killed when he was 13. He was also recently jumped in NYC and taken to the hospital.

Original: Marty Jannetty posted on Facebook to admit that he murdered a man when he was 13-years-old. The 60-year-old wrestler made national mainstream headlines. Jannetty is now being investigated. This post from Jannetty shouldn’t be that surprising if you’re familiar with his track record.

Jannetty has posted many inappropriate things since joining social media. He once asked fans if he should have sex with his daughter. He said Obama wasn’t black until “it was cool to be black.” He also uploaded a photo of himself covered in cocaine while promising that he hadn’t done cocaine in “over an hour.”

Ringside News has documented many of the former Midnight Rocker’s past social media incidents. So, let’s take a look at a few notable ones from just last year.

On February 14th, 2019, Jannetty sent out some incoherent tweets about hookers. Jannetty tweeted out: “I just found out all my girlfriends are pretty” and “I have three hookers if for hose between whatever that adds up to I can’t figure out which one is letting me down.” Happy Valentine’s Day.

Jannetty also posted on Facebook saying that he wants to have sex with a blind person:

Of all the things I’ve ever done in my life and it’s been a whole lot , some of the s*** it don’t even matter if you don’t believe it but one thing I haven’t done I’ve never had sex with a blind girl..I loves my blind people, theyre more special than us who can see..just wondering if I could make them smile..they deserve it, to me, theyre better than us..

A few days later, on February 23rd, 2019, Jannetty sent out two tweets claiming that he had sex with himself for four hours. “I’ve been having sex with me for 4 hours this morning.. I’m starting to get tired of it..lol” and later, “Mosost of my girls live in Houston,.and I dont….lol.. that’s on real.”

On April 25th, 2019, Marty Jannetty posted on Facebook to reveal how many women he’s had relations with. His number was 637 at the time, but it was hard to decide who he loved the most.

But I have to be honest though.. after 30 years my Wendy still sticks with me through all my mistakes(including other women, NOT saying she likes that, she’s dottied my eye once or twice, lol).. so even though I definitely loves every one of my 637 ladies, who do I love the mostest? (And you not suppose to pick a favorite child..but you know deep inside you you do..lol..you just cant say it out loud) you already know. Plus, we produced that sweet lil young lady in the one picture..

On March 5th, 2019, Marty Jannetty posted on Facebook once again. He had a very interesting post about not being able to find his phone. It was a unique problem like everything else in his life.

Dude, where’s my phone?? Last I remember having it was at my neighbor girl’s house up on her roof because I could get a better view of her neighbor girl who was laying at her pool naked..but I went back and looked on her roof but it wasn’t there..

Even more concerning than that, a short time later on March 13th, 2019, Marty Jannetty revealed in an interview that he needed an operation, but he can’t get it. He later said that DDP offered to help him, but they didn’t see eye-to-eye about Jannetty getting sober.

“I’m having a problem with my ankle and it’s a hard adjustment from being a world-class athlete to having to gimp and use a crutch. When I look at guys that are my age like Iron Sheik – man he’s in a wheelchair. Duke ‘The Dumpster’ Droese – from his knee down he’s got a titanium leg. I see that and it hurts my feelings because I don’t wanna see them like that. I can only think what fans must think when they see us like that. Mine’s only a gimp, I can get it fixed. I don’t have health insurance so it’s gonna cost me a little bit. I could do it now, but then I’ll be broke. If I don’t make money after that, then where am I gonna eat?”

On June 7th, 2019, Marty Jannetty posted a lengthy “Cry For Help, Sorta” to Facebook. This detailed all of his partying and his lavish lifestyle. Those days caught up with him, but he didn’t know how to stop.

Jannetty also stated in this “Cry For Help” that he was still partying and like Amy Winehouse, he didn’t want to go to rehab.

A CRY FOR HELP, SORTA…

Yall know I play on here a lot, but bout to be real, real right now..I’ve been partying WAY too much lately, possibly every day since Wrestlemania how ever long ago that was, 30-40 days, I dont even know..but I NEED to stop..but its just hard,, my personality doesnt allow me to be bored..and for me, going from 350 days a year on the road, over a 100 beautiful ladies per year for many many years, to living in back woods Alabama right now and only doing shows on weekends, what the hell else am I gonna do during the week? Drink, smoke a lil plant and possibly throw a lil powder up, then have sex with all the neighbor gurrls..

But its got to stop!!! Im not working out right, not tanning right not studying film, hell I aint doing shit but drinking, f*cking (sorry bout the language) and waiting for the weekends..and now, I got 3 events this weekend,,I’m embarrassed at my own damn self to go do these things in front of my people looking like a pale white fat pig..And I think I have a seminar to do..nothing means more to me these days than teaching my kids..

But, Ive partied so much lately that if I stop for a full day, I go into some weird withdrawal shit..my hands shake so bad I cant even sign autographs right..and therefore, just like what all Im doing this weekend starting tomorrow(a baseball game, an all girls wrestling event, a seminar and a meet & greet for my great friend Denim Blevins’ show) Im gonna have to drink my way through all that so I dont go through withdrawals in front of my people…

I dont want to live like that anymore..and dont suggest rehab…I agree with my super cool & pretty friend Amy Winehouse(RIP, loves ya sweety) when she sang “they told me to go to rehab, but I say NO, NO, NO”..and here’s what y’all need to know about that bullshit..when I lived in New Orleans, I went to 2 rehabs, one for sex addiction, one for drugs & alcohol..the drugs and alcohol one, I ended up roughing up one of the councilors for being a dick to a sweet young 19 year old boy who was trying hard,,I even told the councilor to knock it off, then he smarted off to me for taking up for the kid,,you already know what happened next..he didnt smart off anymore..

Then, the sex addiction clinic..the idiots assigned me to a councilor who was a beautiful blond with big titts, we ended up dating for a few minutes(fucking) I’ll put a pic up so yall can see how stupid it was to assign her to me..

So, I said all that to say..fuck rehabs, I can do this on my own…but my question to yall is…what am I gonna do with the boredom???????.

PS- my heart is talking to me.. hasnt been beating right for 2 days now..not to scare anyone, especially my family..but just further proof Ive got to stop!!! Just told my heart, I will stop..just let me ween down so it not dangerous

Marty Jannetty’s recent run-in with controversy is just one in a long line of incidents on social media. He might have been telling the truth and getting something off his chest that he’s been carrying since he was 13-years-old. Then again, he could have been intoxicated and on social media without a filter once again.

The police are apparently investigating Marty Jannetty, so we will likely know if they figure anything out soon enough.