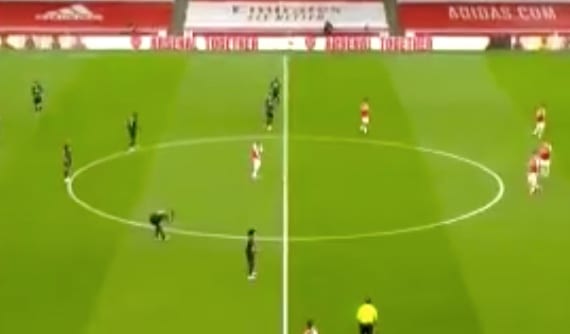 Sometimes, two worlds can collide in a way that doesn’t really make a whole lot of sense to those watching from afar.

We’ve all seen different leagues and TV shows using traits from WWE in their programming, but it’s rare that you see it in the world of association football aka soccer.

Last night, during an English Premier League game between Arsenal and Liverpool, Mikel Arteta’s club decided to use a familiar song when hyping up the players prior to kick-off.

We can only imagine The Game would’ve enjoyed this kind of exposure, if only to see the slightly bemused look on the faces of both teams.

We have a few Premier League stars making a name for themselves in pro wrestling before, with now-Championship player Wayne Rooney slapping Wade Barrett on an episode of RAW and Raul Jimenez paying tribute to Sin Cara by wearing one of his masks in a goal celebration.