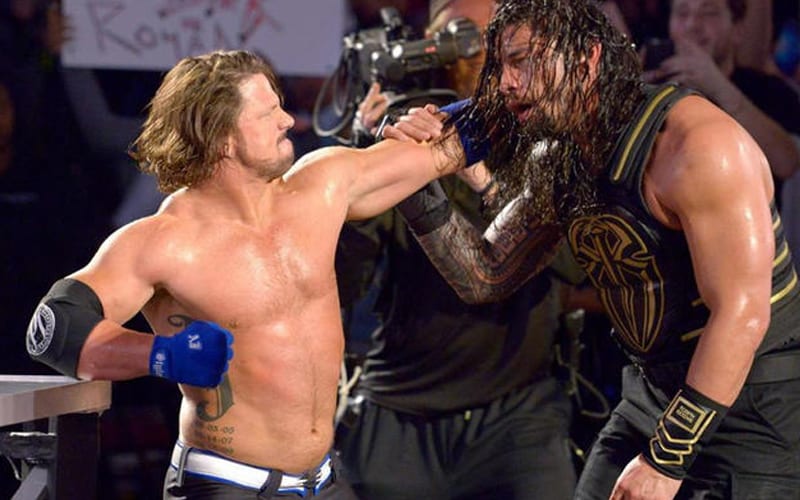 Roman Reigns left WWE when he left instead of wrestling Goldberg at WrestleMania. WWE still misses him and the viewership has been shrinking. AJ Styles believes the two might be related.

RAW earned record low viewership numbers in recent weeks. This is to blame on a lot of things, but Roman Reigns was a SmackDown Superstar.

While speaking with SunSport, AJ Styles said having him back would be a big help for WWE.

“You can’t deny the fact that Roman Reigns is one of the biggest stars in WWE. He’s WWE. I mean, he’s the guy. so to get him back could be a big help.”

AJ Styles later credited Roman Reigns for some of his success in WWE. He stated that his career is where it’s at because of how the Big Dog worked with him which really helped establish him as more than an indie guy.

“You have this indie guy in 2016. This guy from Japan just walked right in there and step in the ring with Roman Reigns.

“Now the perfect scenario was in place because not everybody loved Roman. Now he is definitely one of the biggest stars but not everyone loved Roman then and so you have this indie darling, right?

“And it was like, oh, they made it easy for me to be in there with Roman, because Roman is such a huge star.

“It only got better from there when I had the opportunity to get in the ring with Roman, one of the pay per views, actually a couple of pay per views I think.

“When I’ve got a title opportunity, it was against Roman Reigns. Unbelievable match. I’ve watched it back. Wow. I can’t believe we did all this stuff that was really good.

“So, yeah, Roman Reigns is a big part of the reason why my career’s where it’s at.”

Roman Reigns is still at home in full quarantine mode. He’ll be back in the ring and is staying in great shape as well. It will still be some time because he’s not factored into any SummerSlam plans.