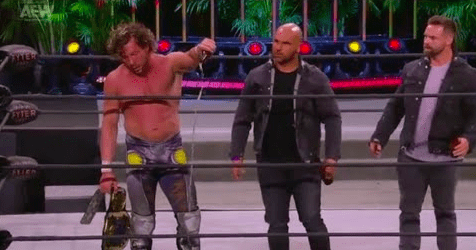 At Fyter Fest, FTR approached Hangman Page and Kenny Omega with a few beers but Omega disrespected Cash Wheeler & Dax Harwood by spilling all the beer without drinking it.

This obviously didn’t sit too well with Harwood & Wheeler and now there’s some heat between the two teams.

Kenny Omega recently had an interview with CBR where he revealed his thoughts about a future match against FTR. Omega said that AEW has one of the deepest and most diverse tag team divisions in the business today.

He said that he and Page have butted heads with a number of teams but none like FTR, who are heavily influenced by old-school tag-team wrestling. The thought of facing a team like FTR that stands apart from rest of the teams in the company excites Omega very much.

We have one of the deepest, most diverse rosters in tag team wrestling. I do believe that we have the very best tag team division in all professional wrestling. Whether it be because of the greatest tag team of all time, the Young Bucks, or we have more international teams such as the Lucha Brothers or Strongheart, and I do believe one of the boxes we hadn’t checked was a very rough and tough old school influenced team like FTR. Though it excites me to have two guys that have a skill set unlike anybody else and has very different wrestling ideology than all of us. What they believe in and their plan of attack to their matches is very different than how I go about wrestling. And I think just like in mixed martial arts, or boxing, styles make fights, and I think people want to see these different wrestling influences and cultures mix and clash in the ring.

Omega went on to say that fans might be extremely hyped for a match between the Young Bucks and FTR but there’s a lot of interest for Hangman Page & Kenny Omega vs FTR as well. He said that there’s potential for the two teams to have a great chemistry with each other in the ring.

So as interesting as it is to see Hangman Page and Kenny Omega face the Young Bucks or Lucha Brothers, I think there’s just as much interest in Hangman Page and Kenny Omega versus FTR, because it’s three different valves. Hangman Page is his own wrestler, I’m my own wrestler and FTR is so in tune with each other. I think there’s a chance for some very good chemistry there and I think the dynamic of the two teams working against each other is going to be really exciting for fans. And just in general, for the division having them around is gonna really spice things up and I’m always dying for that. I want people to be on their toes excited for every matchmaking opportunity within the division.