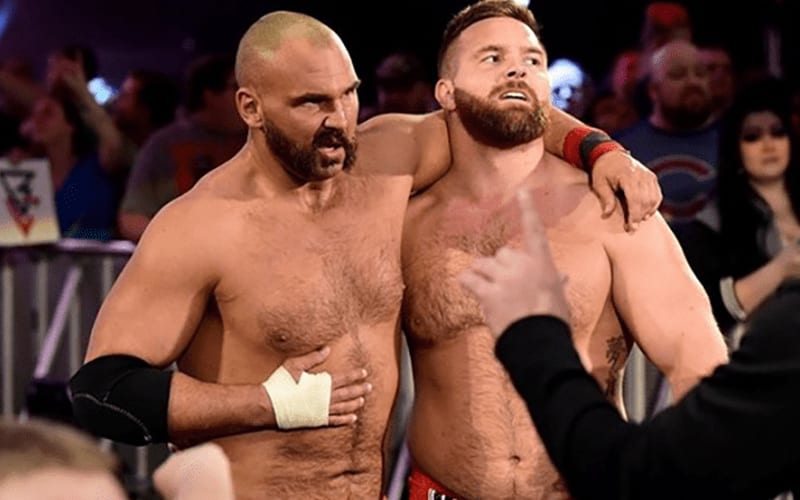 FTR weren’t enjoying their time as The Revival in WWE for multiple reasons. Now they are Top Guys in AEW. Dax Harwood and Cash Wheeler are set to team with the Young Bucks to take on The Lucha Bros and Butcher & The Blade during the second night of Fyter Fest.

There were a lot of contributing factors to FTR not re-signing with WWE. They had large contracts on the table, but they declined them. Eventually, they were granted their release.

While speaking to Busted Open Radio, Dax Harwood opened up about what frustrated them in WWE. They have a lot to be thankful for, but they both realize that WWE would have kept them “spinning their wheels”

“Obviously, in the WWE we had a lot to be thankful for. Right now, I’m sitting in my house and I’m looking at my beautiful wife and daughter and I am thankful they gave me the opportunity to allow my family to have the life they did. On the flip side of that, my first love before my wife and daughter was professional wrestling. I am infatuated with professional wrestling. It’s done so much for me as a kid and into adulthood.”

“We both felt like if we stayed in the WWE that we would just be spinning our wheels. There is so much more I want to give back to professional wrestling. I don’t want to just sit back and relax. I don’t want to rest on any laurels or anything like that. We want to leave a mark and we want to leave a legacy in professional wrestling, and obviously, on top of that, we want to make money too. With AEW and Tony Khan, they provided us the opportunity to do both and we think for the legacy we want to leave for wrestling. We want to do wrestling proud and I think this is the best opportunity to do wrestling proud.”

FTR will now have an opportunity to leave their mark on AEW. They have much more freedom as well. Vince McMahon banned a move they really wanted to do, but we might just see them bust it out in All Elite Wrestling.

At this time we have not heard that FTR have signed actual contracts. They reportedly agreed to handshake deals when entering AEW.