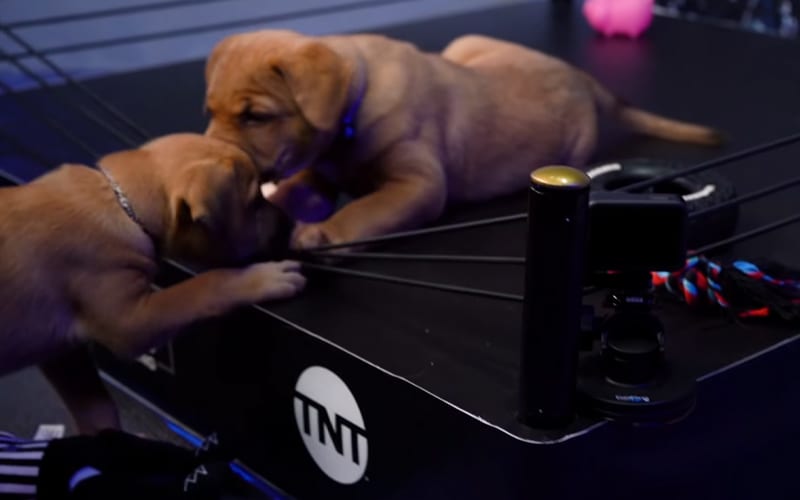 When AEW Fyter Fest ended the Puppy Battle Royale began. It was crazy, but Pharaoh was around to make sure things didn’t get too out of control.

Aubrey Edwards was also there to lay down the rules. All four paws must hit the ground for an elimination to take place. Also, if “an elimination takes place” then that puppy is also out of the match.

They were in an AEW ring and represented different wrestlers. There were two separate battle royale matches. One was female and the other was for the males.

There were plenty of inside jokes including Tony Khan sending Tony Schiavone a note saying that this is “the greatest puppy battle royale of all time.” Schiavone also said that the matches with puppies were better than anything he called in 2000. There was a referee, but it was used as a chew toy. That’s typical for AEW referees.

It was pandemonium and then Penelope Ford’s puppy won the female battle royale. The puppies were born on mother’s day and actually named after AEW wrestlers because the puppies’ foster mom is a huge AEW fan.

They went to a picture-in-picture video where the puppies’ foster mother told a story about Tony Khan setting up the Puppy Battle Royale. Then they had a chance to share some information about animal adoption.

In case you’re wondering, puppy MJF won the male battle royale because he’s better than your dog, and you know it. Tony Schiavone couldn’t figure out who would name a dog MJF.