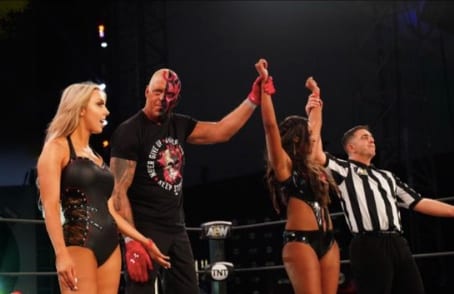 While he started off his AEW journey on his own, Dustin Rhodes has aligned himself with a few different faces over the course of the last few months.

The veteran, formerly known as Goldust in WWE, has been able to grow his own legacy whilst also helping those around him to improve.

Two such examples of that are Allie and Brandi Rhodes, both of whom continue to go from strength to strength under his guidance.

Something pretty wicked is happening with these 2. I think the world needs to see some more. If you watched #AEWDark tonight, you’ll understand where I am coming from. #BeCautious #DontMessWithFamily @TheBrandiRhodes @AllieWrestling @RefAubrey

Nobody really knows how along he’ll be able to keep going at a consistent rate with All Elite Wrestling, but it’s safe to say that the early signs have been good.

The women’s division in the promotion is finally starting to pick up some steam, and these two are a big part of that.