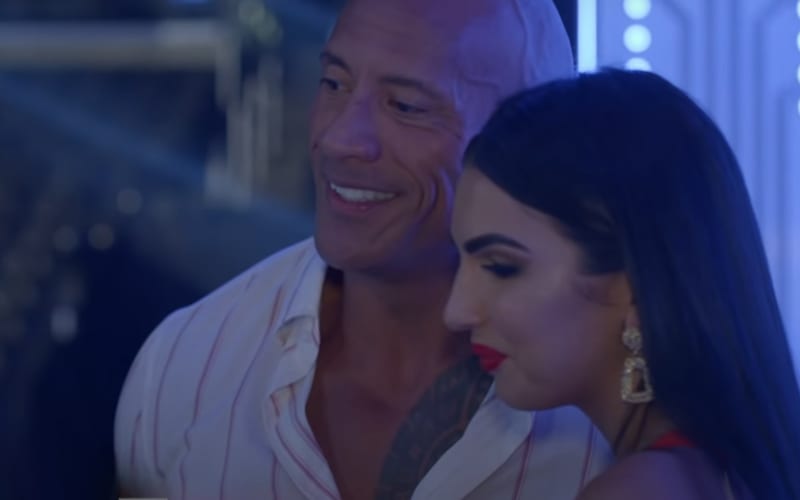 The Rock doesn’t come around WWE very often. When he does stop by there are a lot of people who can’t wait to talk to him. His friend Billie Kay is right in there with those people.

The IIconics just returned to WWE television following WrestleMania. Click here for Ringside News’ exclusive on what to expect from them.

Australia’s Wide World of Sports recently spoke with Billie Kay when Dwayne Johnson came up in the conversation. She admitted that it was one of her greatest life moments to meet The Rock. It was also nerve-wracking in a big way.

“That was one of the greatest moments of my life. I was so nervous. I remember walking to the ring and I was going to wait for him,” Kay said of meeting The Rock. “I was shaking, I couldn’t sit still, I was pacing. As soon as we made eye contact, I started crying. We hugged, it was amazing, he smelt like magical unicorns and rainbows. It was fabulous.

“We were able to talk for a few seconds and he had mentioned he watched our IIconics stuff and that we were doing great and to keep going and a couple of other little things. It was very special to me. It was such a surreal moment for me. I had people reaching out to me from high school after I posted the picture of him and I, people that I hadn’t spoken to for 8-10 years were saying how proud they were. Even in high school, they knew that was something I always wanted to achieve, just to meet him.”

Billie Kay was very happy to report that she is now friends with The Rock. They even have “little Twitter and phone messages” from time to time.

“We are friends, we’re mates. We have little Twitter and phone messages here and there. I’m fortunate enough to have him in my life as a friend which is absolutely absurd and very surreal, but hey I’ll take it.”

The Rock and Billie Kay might have an unlikely friendship, but sometimes those are the best kind. Kay looked up to The Rock for years and now she can contact him directly if she ever wants to run an idea past him.

We’ll have to see if Billie Kay’s connection with Dwayne Johnson might someday get her cast in a film role. In the meantime, Billie Kay is very happy to call Johnson her friend.