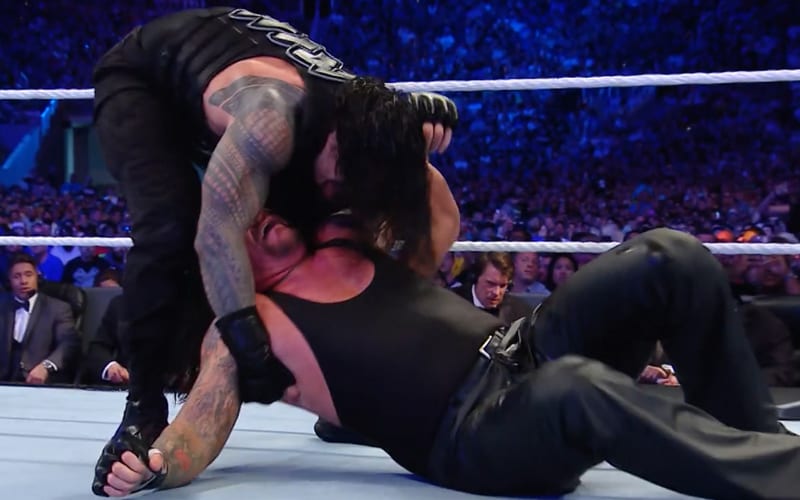 Ric Flair wrestled a full career before finally ending things at WrestleMania. The way he sees it, The Undertaker could have done the same thing, but he let a botch get to him.

While speaking with Metro, Ric Flair opened up about The Undertaker’s match at WrestleMania 33 against Roman Reigns. The Big Dog and The Phenom told a moving in the story that was capped off by The Undertaker removing his gear before leaving Camping World Stadium.

The reaction that Reigns received on the following night on RAW was astounding. He was booed out of the building after defeating The Undertaker. To this day, Ric Flair wonders how they let that heat slip away.

“When [The Undertaker] hauled up his stuff, put it in the middle of the ring and walked out, the next day on RAW, Roman couldn’t talk! I thought to myself, ‘Man, I’ve been in a lot in my life, but if I’d had that hot tag brother, I could’ve rode that forever.’ I don’t know what happened! But that was the hottest tag in the history of the business! That’s made the thing with Brock [Lesnar] beating him pale, in terms of emotion!”

Roman Reigns botched a Tombstone reversal at the show of shows. They fell to the mat instead. The two abandoned the spot and Reigns went right into a Superman Punch.

Ric Flair discussed this botch and stated that it was “one little botch.” It could have been blamed on a lot of things, but The Undertaker is a perfectionist.

“Actually, I thought he and Roman had a hell of a match! One little botch like that they keep playing over and over again. One little botch, if you’re a guy that’s a perfectionist like [The Undertaker] is, that’s gonna bug you. One little botch, OK? It can be caused for a number of reasons, it can be a timing issue. That was still a hell of match!”

The Undertaker has supposedly wrestled his last match. We’ll have to see if that sticks. A lot of people seem to think that he will wrestle again including CM Punk. Big E also felt the same way about the Deadman’s retirement.

Do you think that The Undertaker would have retired at WrestleMania 33 if they didn’t botch that Tombstone spot? Sound off in the comments below!