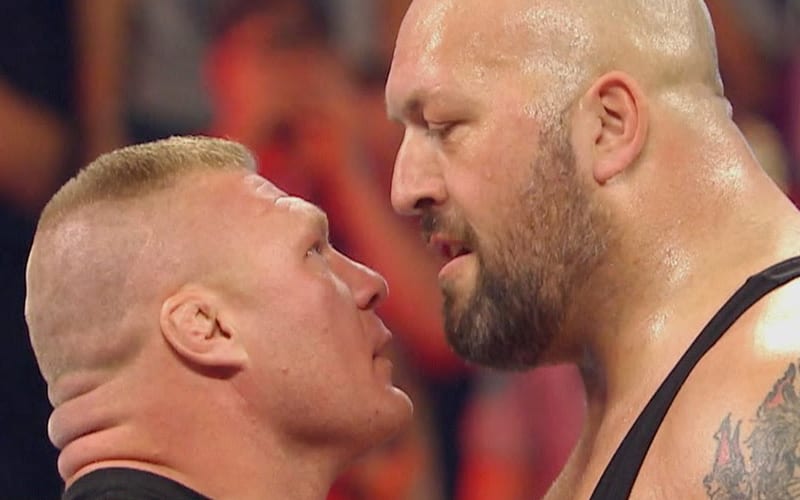 The Big Show is a shoo-in for the WWE Hall Of Fame, but his career might not have experienced a very important resurgence if it wasn’t for Brock Lesnar.

While speaking to Talk Sport, Big Show admitted that Brock Lesnar is one of the Superstars he wrestled who helped his career resurgence. He also credit Kurt Angle for being in that same class of Superstar.

“Brock is one of those guys, just like Kurt Angle, who really got our business, the nuts and bolts of it, immediately, right off the bat. And I owe a resurgence of my career to Brock Lesnar.”

Big Show was sent to OVW in 2000 for some extra work. He then found out that OVW was full of promising young Superstars. Two that really stood out for him was Brock Lesnar and Randy Orton.

“I put up the ring with Brock Lesnar and Randy Orton. We used to have to set up towns in Louisville. I remember I had been in the WrestleMania main event wrestling The Rock, Triple H and Mick Foley and five months later I’m signing autographs in a gas station in Kentucky because that was an appearance set up by OVW. I spent three hours on Saturday signing autographs in a Marathon gas station because I had to do what they told me to do. And these are experiences that were good for me to learn, but it was also good for me because I got to meet a lot of guys who were early in their career; Brock, Randy, John Cena and Dave Batista.”

He started working with Brock Lesnar in OWV. This feud would eventually see a much larger spotlight on the WWE main roster.

“I remember whoever Brock was working with when he came up here – because Brock, right when he first came up, everybody knew he was going to be something right away – whoever it was missed a flight or whatever it was and Brock didn’t have an opponent for the main event that night. So Jack Lanza put me in the main event that night. He said ‘well, we’ll have Big Show wrestle Brock’.

And Brock and I, because we trusted each other, we actually just went out there and tore the house down and had fun. And that was one of the first agent reports that went from the live events and went back to Vince. Vince said to me ‘so you work pretty well with Brock?’ And I said ‘yeah.’ And then it went a long and they asked Brock who he wanted to work with and he said me. He said ‘he’s a giant who can work.’ So that kind of endorsement, they were forced to take another look at me and I was able to make the best of that opportunity.”

The Big Show is now seemingly slated to face Randy Orton at Extreme Rules: The Horror Show. It’s interesting how some things come full circle in that regard. We’ll have to see if Brock Lesnar and Big Show ever lock horns in the ring again. They certainly created enough memories inside and outside of the squared circle already.