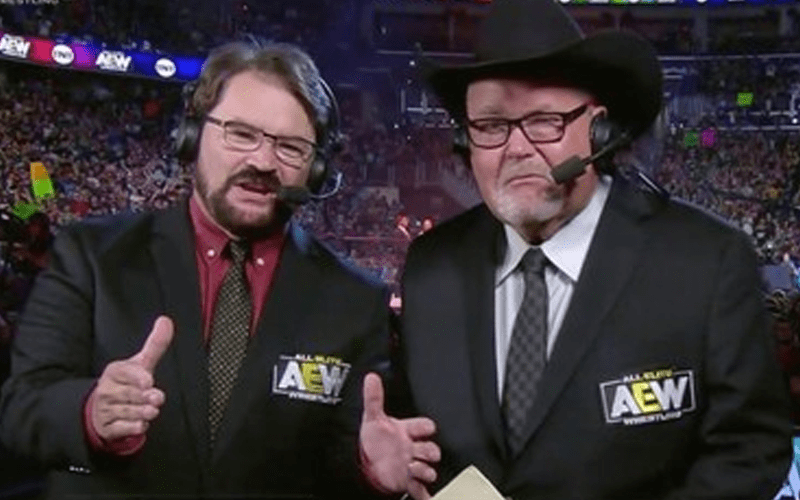 Hardly anyone would argue the fact that Jim Ross is the Voice of Wrestling. In fact, the legendary announcer was recently awarded the trademark by the United States Patent & Trademark office.

Ross spent the majority of his career calling matches for Vince McMahon’s WWE. However, he is now the voice of AEW and is quite content in working for Tony Khan.

While speaking with Sports Illustrated, Ross talked about his AEW stint and how his experience has been so far with the company.

Ross said that he’s called the matches between the likes of Stone Cold & The Rock and has refereed in the match between Harley Race & Dory Funk and now, he’s calling the matches for this generation’s Superstars in AEW.

Good Ol’ JR said that passion and creativity resonate throughout the entire AEW roster and he name-dropped a few of the company’s biggest stars.

I got to referee Harley Race-Dory Funk, call Steve Austin against The Rock, and now I am calling this generation’s stars in Kenny Omega and Hangman Page.

I’ve been blessed in this business, and it’s an honor to call the talent I’ve called and still do today. They’re so passionate, creative, and talented. That resonates throughout our entire roster. Mox, Jericho, Cody, Britt Baker, Sonny Kiss, MJF, Scorpio Sky, they’ve got it.

Ross hyped the two-night Fyter Fest event and said that it’s going to be a great show and said that the company’s best work is still ahead of them.

It’s been a hell of a run so far, but it’s not over. Our best work in AEW is yet to come. FyterFest is the equivalent of a pay-per-view, and it’s free. We’re dealing with coronavirus issues, just like everyone else, but it’s going to be a great show.

The WWE Hall of Famer said that he will always be “indebted” to AEW President Tony Khan for an opportunity to announce in AEW. He said that he feels “wanted” in AEW and that it’s a great feeling.

I will always be indebted to Tony Khan for bringing me aboard AEW. I feel wanted in AEW. That’s a great feeling.

Night One of Fyter Fest ended last night and you can read the full results for the show by clicking here.