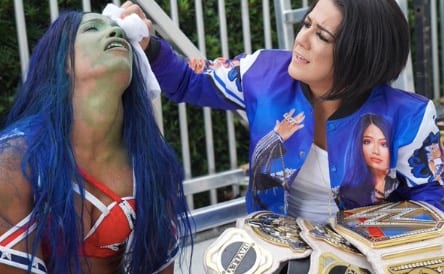 Sasha Banks put up one hell of a fight in her showdown with Io Shirai last night, but in the end, she came up short as Shirai successfully retained the NXT Women’s Championship.

Asuka played a huge role in helping her do so, interfering in the final stages of the match to hand the advantage to Shirai – nullifying any impact Bayley might’ve had.

In the immediate aftermath of the result, Bayley took to social media in order to issue a warning to both Shirai and Asuka.

Io and Asuka are DONE FOR

Bayley and Banks are on the best runs of their respective careers right now, with the best friends thriving in their current heel role.

The expectation is that they will continue to dominate before eventually going against one another for the SmackDown Women’s Championship, with SummerSlam being a potential landing spot for that match.

For now, though, they’ve got their hearts set on revenge.