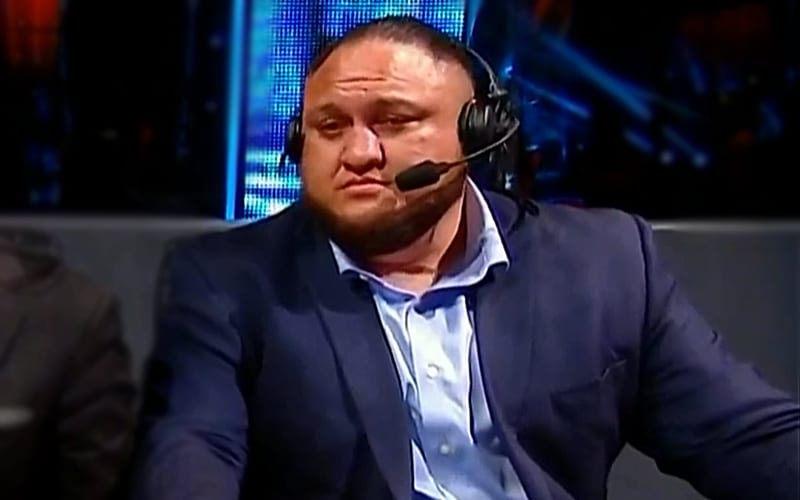 Samoa Joe’s concussions brought him to the commentary table, but it was a very smooth transition. His current injury status is unclear, but it appears he’s not taking off his headset right now.

Samoa Joe sustained a concussion while filming USA Network’s “Must Be Monday” commercial. They kept the take in the finished product. This occurred during a time when Joe was just establishing himself in the ring once again following another return from injury.

While on WWE The Bump, Samoa Joe spoke about his first time on commentary. He filled in for Jerry Lawler for a few weeks before returning to the ring prior to his concussion. He had no aspirations to be on commentary, but once Vince McMahon heard him he said it felt right.

“I’ve had zero media aspirations. I just drift through life, and things just hit me as they come. I got on the commentary table – it was funny when the light shined on me, I started to hear the angels sing, I said to myself, ‘You know, this might be a good fit.’ I then put my headset on, and Vince [McMahon] came through and said, ‘You know, this feels right.’ I was like, ‘I know!’

“It’s been a weird journey, but I’m still on it. It’s an odyssey and a quest. I’m just trying to take the world along with me. I have a very descriptive mind, you know, when I see things, my observations are quick to come right out of my mouth. So yeah, it’s been working out very well.”

Samoa Joe is very valuable in the ring, but his commentary skills are also undeniable. The story of Samoa Joe in the ring likely hasn’t closed. While he waits for that moment WWE found a great way to keep him on television.