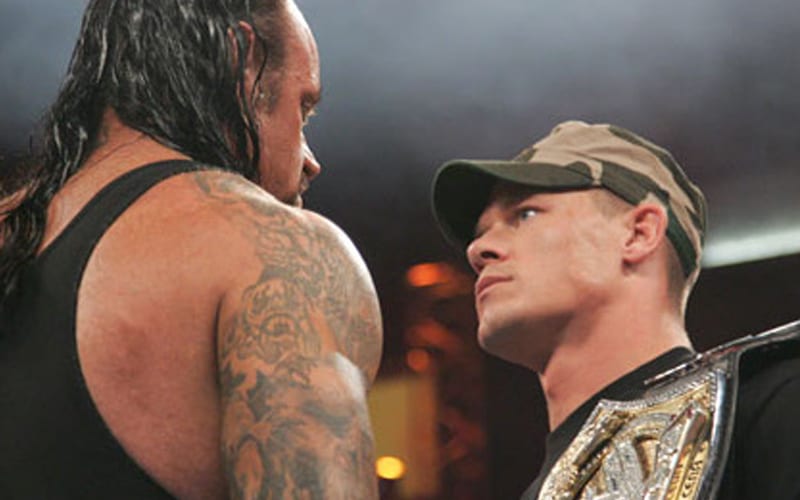 John Cena spends far more time in Hollywood now than he does in the squared circle. There was a time when Cena showed up wherever he was asked, and The Undertaker was a bit concerned. The Deadman didn’t want Cena to get burned out.

The Undertaker has apparently wrestled his last match. WWE is now speaking of the Boneyard Match as if we’ll never see Taker wrestle again. As he looks back at this career he can now openly speak about his experiences.

While discussing his career with Corey Graves on After The Bell, The Undertaker revealed his thoughts about John Cena. He wouldn’t have thought “in a million years” that Cena would get over like he did. Cena became the most polarizing figure in pro wrestling who never turned down a media appearance.

The Undertaker also revealed that there was a time when he had to stop John Cena and give him some advice. He told Cena that he needed to learn the word “no,” or he might find himself getting burned out.

“I tell you what, when John came out early on, I would have never thought in a million years that he would get over to the extent that he did, and pleasantly, I mean just pleasantly surprised how over John got,” Undertaker said. “I mean he was over over. There’s that next level over that he was whether good or bad. That was another thing. I’ve never seen anyone last as long as he did with such a polarizing opposite love-hate. Normally, it’s one way or the other. I’d never seen one guy come out one night and get booed out of the building. The next night get a 10-minute standing ovation. It was just crazy.”

“I can’t name anybody else really that’s ever gotten that kind of polarizing fan reaction. Usually OK, we’re going to go this way with this character and we’re gonna make him this and we’re going to make him that, and John did John. That was a great thing. John did John, and it came off so good. He put his time in. Man, I know John is a super overachiever, just his work ethic, second to none. I mean his media schedule on top of his work schedule. It was outrageous. I’ve actually told him that one time. I said, ‘John, for your sake, you need to learn the word no because.’ I mean he did everything. He never did. He proved me wrong, but I just said, ‘man, you’re going to burn yourself out.’ He’s amazing.”

John Cena didn’t stop. He granted a record number of Make-A-Wish requests, and he still kept a full-time WWE schedule for years. Even to this day he has an incredibly busy schedule, but he’s not doing a lot of WWE business anymore.

It’s hard to say if The Undertaker’s words hit home with John Cena. We can only imagine that Cena learned to say “no” every now and then.