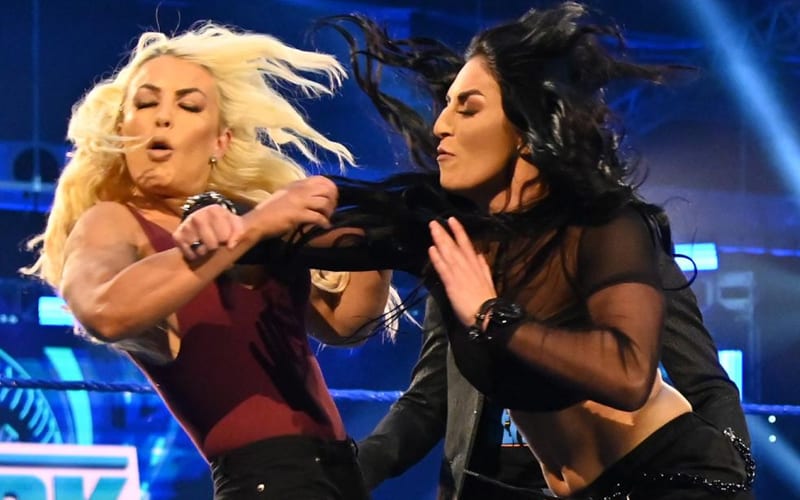 Sonya Deville and Mandy Rose’s program took a long time to finally come to a head, but there were plenty of real moments included. Deville stated that it was very important to keep her feud authentic.

Deville and Rose’s feud heavily featured Dolph Ziggler and Otis. It’s unknown what is next for the two now that the Show Off is on RAW. Ziggler previously stated that if WWE had live events then they would have been given a better opportunity to develop chemistry.

The former Fire & Desire member stopped by Better Together with Maria Menounos. She discussed her feud with Mandy Rose and explained how their one goal was to make the fans care.

“The only thing that’s been important to Mandy and Me throughout this entire thing is that we keep it authentic. We make it something that the fans- whether they love Mandy or hate Mandy, they love me or hate me – we don’t care. We just want them to feel something.”

“I think at the end of the day, that’s what most performers want. I’m saying my truth, Mandy’s saying her truth, and we’re both completely entitled to do so, and it’s up to you guys whose truth you side with! Love me or hate me, I think it’s one of the most genuine storylines WWE has done in a long time. It’s super rewarding.”

Sonya Deville and Mandy Rose pitched a lesbian angle to WWE last year. It wasn’t accepted, but you can never say never in WWE.

Right now Sonya Deville is on to her next storyline on the blue brand. It’s hard to believe that she will never cross paths with Mandy Rose again.