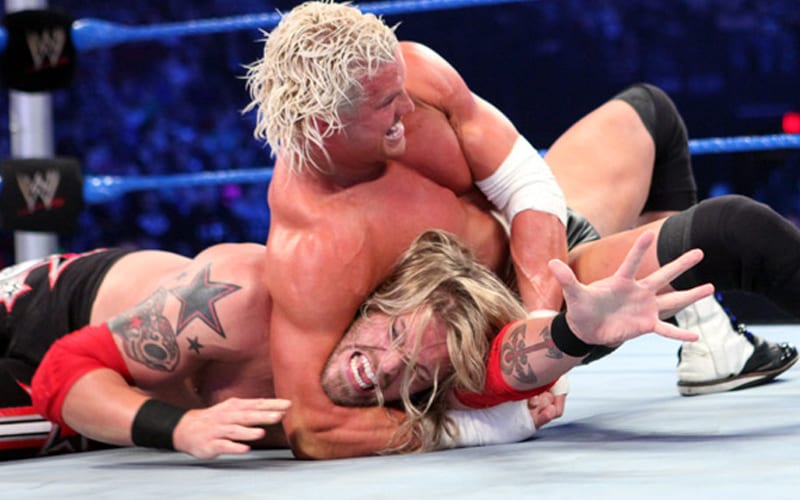 Dolph Ziggler’s 15 year career saw him working with legends and newbies alike. He has history with both Randy Orton and Edge, two main event names on the red brand. These are histories Ziggler wouldn’t mind revisiting down the line.

While speaking to Sports Illustrated, Dolph Ziggler discussed his relationship with Randy Orton. He stated that a lot of people are afraid to correct Randy Orton backstage. He doesn’t fall into that category of people.

When it comes to another match with Edge, The Show Off is hopeful. His move to RAW certainly opens the door for that possibility. When asked about the possibility of facing Edge again, Ziggler relived their 2011 World Title match.

“And Edge, that Royal Rumble match [from 2011] we had was so cool. I was a guy that lost 99% of the time. I didn’t talk—Vickie [Guerrero] talked for me. When we got to the match, I was so fortunate to have traveled with and be friends with Adam and Jay [Edge and Christian], Tommy Dreamer and [Chris] Jericho. They’re so good, they’re so smart, and me being around them, I became almost as smart. We had this match, a guy that loses every week in a world title match against Edge, and there was no cool backstory. I didn’t cut a 10-minute promo with my life story, nothing like that. But we built this up for a couple weeks and maybe, maybe, I had a 1% chance of winning, which I’ve made a career out of over the past 15 years. I learned so much from Adam on the road during the live events we did together. I mentioned earlier that I wish I could have done a bunch of live events with Mandy, Sonya and Otis because I could have helped them even more. Getting that time with Adam meant so much to me.”

“I almost forget how having fans sounds, but we opened the show that night at the Rumble with a world title match and the crowd was hot. Everyone knew I was losing that match for the first 10 minutes, but the rest of the match was back-and-forth. People weren’t sure what was going to happen, and no one sat down during those last 10 minutes. As much as I try to take credit for everything I do, that was just me trying to hang with Adam. Back then I thought I was great, but I go back and watch that now and there are a million little things that piss me off. But the reaction from that crowd, going from thinking I couldn’t win that match to not knowing if I was going to become world champion, that’s a credit to how good Adam is.”

“I can’t speak highly enough about Adam, and that is one of my absolute favorite matches, which also has to do with our history outside of the ring. If there is a chance where him and I get to go toe-to-toe in the ring again, I would love it. Adam might be in the best shape of his life, which again, like Randy, is starting to piss me off. They’re out there doing 45-minute matches, crushing it, and looking like a million bucks. I need to step up my game.”

Right now Ziggler is immersed in his WWE Title feud with Drew McIntyre, and Edge is injured with a torn triceps. You can never say never in WWE. At this point, a lot of fans are starting to forget how an arena full of fans sounds like as well.

WWE is working on getting live events scheduled again. An Ohio event was recently revealed for September. The company’s scheduled July live events were called off.

Those plans will also take a lot of cooperation from the COVID-19 pandemic that doesn’t seem to care about Vince McMahon’s schedule.