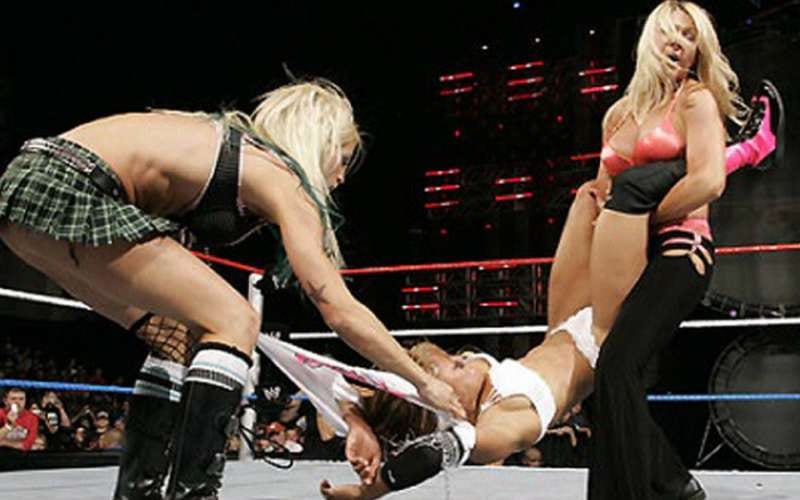 WWE’s women’s revolution was a big focus as Ronda Rousey championed the company. They have taken a bit of a step back in recent months, but women’s wrestling receives a much better spot on the card than it did in previous years.

While speaking to Fox News, Alexa Bliss praised the women who blazed a trail before her. She credited those Superstars who changed the idea of a “catfight” in WWE. She also respects those Superstars who were able to do the bra and panties matches which is something she could never do.

“When I first started in NXT, there were certain moves we weren’t required to learn because we were never going to do them. The idea was a catfight. It all changed for me when I was watching a match with Paige and Emma. They did a top rope suplex and we were like, ‘Hell yeah, this is where it’s all going to change.’

“It was awesome because it shows our women are athletic, can do what the men do, and can be seen in a different light. I respect the women who had to do the bra and panties match because I could never do it. Kudos, I couldn’t do it. You’ve got to respect that because they did that, for us to do what we do now.”

Gail Kim took part in some of those gimmick matches that Bliss referred to. She’s never looked at things in the way Bliss put it. Kim continued to say that she never felt like she had a choice to go through that trauma.

Never looked at it that way. I just have to say out loud that this along with some other gimmick matches similar in nature were some of the most traumatic moments of my life that I have to live with, feeling like I never had a choice.

Lance Storm followed this up by recalling one particularly degrading match that he witnessed. WWE has obviously gone a different direction with women’s wrestling since then.

The worst I ever saw was the over the top rope match (I think they did it twice) where the guys fought and had a woman representative on stage and when “their” guy was thrown over the top rope they had to take off a piece of clothing.

WWE might still have some way to go in regards to equality on the roster. They have made a world of progress since the days that Gail Kim wrestled for the company. Alexa Bliss has Kim and every other trailblazer to thank for that as well.