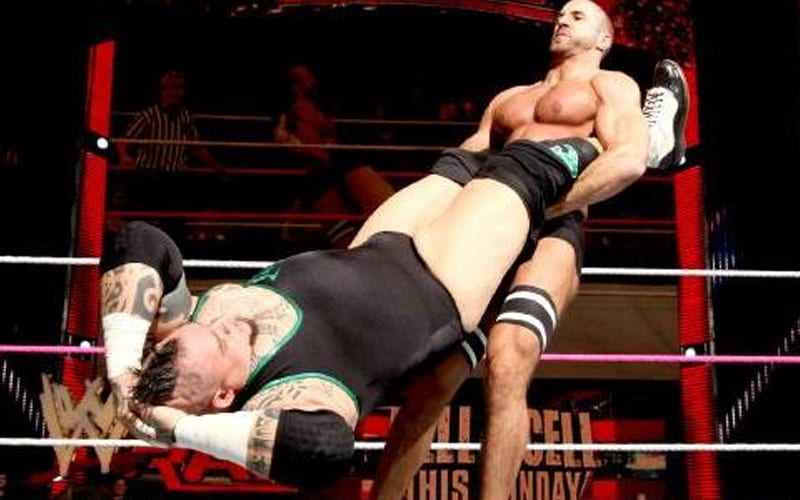 Cesaro might be the strongest active WWE Superstar, at least he is certainly in the running. The Cesaro Swing is difficult to pull off no matter who he has in the move, but a couple Superstars are especially difficult.

While appearing on WWE The Bump, Cesaro revealed who is the hardest to swing. He gave two specific names: The Great Khali and Big E.

Khali is obviously a giant so it takes a ton of effort to get him off the ground and moving in the swing. Big E is hard to have in that move simply because of his natural girth.

“I mean Great Khali is unsurprisingly one of the hardest ever. I mean, like, surprisingly? Like someone who I thought would be hard, but wasn’t or someone like Hornswoggle where I’m like okay clearly this is not going to be that hard? I can’t tell you someone who was surprisingly light because it’s hard with everybody, but Great Khali was definitely really hard [to swing].”

“Big E is always a hard one because he’s very dense, very heavy. That’s why his splash – oof — his splash let me tell you. There’s a reason they throw pancakes out because that’s how you feel after that splash every time.”

Cesaro gives everything he has when he steps in the ring. Sometimes he has huge Cesaro Swings in him as part of the performance. It isn’t a move he breaks out every week, but when he does the Cesaro Swing always counts.

Now that he’s in a tag team with Shinsuke Nakamura the two are also implementing that move as part of their “Swingshasa” finisher. It appears they are vying for the New Day’s SmackDown Tag Team Titles next. We could see much more of the Swingshasa.