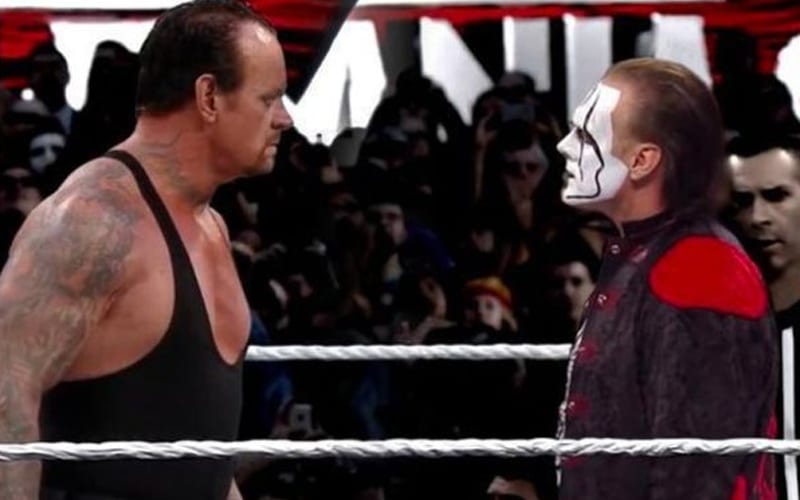 WWE fans often concoct dream matches for their favorite Superstars. Sometimes those dream matches become a reality. If Goldberg vs The Undertaker taught us anything it’s that sometimes dream matches are best left inside our heads.

Sting left WWE recently, but you can never say never in pro wrestling. This is something The Undertaker echoed when he discussed the possibility of having a match versus The Stinger.

ComicBook recently got Taker to speak about a possible match against Sting. In the end, The Deadman said that fans have their hopes up so much for that match it would certainly be disappointing.

“Well, in this world, you never say never, but I think as great as it sounds on paper, and it does. I mean obviously that is a super marquee match, right? But where I kind of differ from a lot of people is I look past the marquee value, and I look on the ability to deliver. So like you said, there’s so many people that are clamoring for that match that I just don’t know that the match could deliver on the people’s expectations.”

“And the only reason I say that, I’ll take full [responsibility], I don’t have the mobility or the same skill set that I once did that I would need to make that match great. So there’s just certain things, it’s better left to the theater of the mind to actually put it out there.”

“And then with the expectations being so high and the match not delivering, it would be a bigger disappointment than the match never happening at all. It’s different, but in the same sense of like who’s the greatest: [Michael] Jordan or LeBron [James]? I mean, you’re never going to know because they’re never going to have the opportunity to play against each other.”

“And it’s the same thing. That’s a great match, but 10 years ago I think it could still happen and it could still be a stellar match. I’m just not sure at this point that it could deliver on the hype.”

The Undertaker could have one more match left in him. Then again, he signed a 15 year deal with WWE last year that will keep him under contract until he’s 70.

The Deadman will probably have the option to wrestle again whenever he likes. All it would take is calling Vince McMahon. There must be a time to call it a career and it seems that The Undertaker is approaching that day without locking up with Sting.